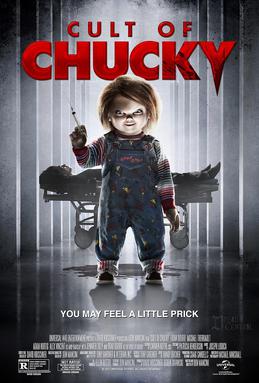 The voices of Brad Dourif and Danny deVito sound so similar they could be… twins…Anyway, Cult of Chucky does double-up, but on Dourifs. Brad’s daughter Fiona (known for her role as a prostitute sent out to the badlands of Deadwood, and as Casey in True Blood) co-stars with dad in this, the 7th installment of the franchise based on a doll with a shock of red hair. And it’s a series which still has shocks to spare.

From the get-go, things seem bleak. You get the obligatory horror sequel exposition, told in flashbacks and you wonder whether this Child’s Play entry is headed straight for the sewer.

Then, we see dissevered Chucky’s head, stuck full of nails, and chained to a table. And like The Brain that Wouldn’t Die, Chucky lives on. Young Andy, all grown up and living in a survivalist, taxidermied apartment,  has been exacting revenge, taking a blowtorch to the doll’s dome and abusing what’s left of it.

In a nearby insane asylum, wheelchair-bound Nica (Fiona Dourif) has been going through therapy, institutionalized as the fall guy/patsy for Chucky’s murders. Sure, it’s a bit of a stretch, but she’s more than capable and compelling enough as a character to have the flick revolve around her.

As part of hers and her fellow patients’ rehabilitation, resident psychologist Dr Foley, introduces them to a ginger therapy toy, and filicidal Madeline (Elizabeth Rosen) takes to the Good Guy doll as if it were her own son, a fascinating twist.

Soon, each patient starts to claim that the doll is sentient, prompting the not-so-good doc to observe, “it’s fascinating to see mass hysteria in action!” (The Foley/Chucky dynamic is terrific: Turns out Foley has been dosing patients with Methohexital and abusing them when they’re under, and Chucky can’t help but be impressed by his malpractice maleficence).

But things get fun when Chucky cuts loose to do what Chucky does best: kill.

There’s even one thrilling horror movie weapon death that would have made it into our book.

Cult of Chucky is a pretty stellar entry in the Child’s Play series. This is one mean-spirited red-head who could give Oliver Cromwell or Axl Rose a run for their money.