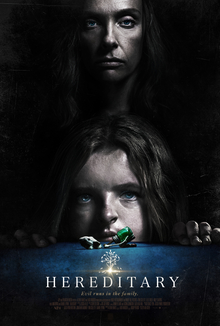 The only horror movie subgenre routinely lauded by critics is the supernatural one, which puts the writers of this site at a distinct disadvantage: we don’t care for it.

Supernatural horrors (like Hereditary, to a certain extent) are punch-pullers, which downshift gory elements to get teen bums in seats and bypass R-ratings.

With a dearth of deaths, and absent the uber-violence of other genres, supernatural thrillers are like a guitar missing its E-strings: they are limited in the extent with which they can compose a full melody, and create broader frights.

Hereditary, (much like ghostly genre standout The Changeling), to its credit depicts a jarring death to kick things into gear and to haunt the living.

Annie, an early-round exit from the Mother of the Year tournament, lets her 13-year-old daughter, Charlie go to a house party with her older, stoner old son, Peter. Charlie gets a food allergy and a wigged out Peter guns it in his parents’ car, hoping to get his sister to a hospital as anaphylactic shock sets in, and kills her in the process.

Charlie is posthumously haunting the home’s inhabitants, with Annie second guessing her judgement (and with good reason: any parent with a lick of sense would notice Peter’s bloodshot Eeyore visage).

From there, guilt wracks the mother-son dynamic, with a helpless psychiatrist patriarch, Stephen, helplessly looking on (played by Gabriel Byrne) as Annie’s mother passes away too and her grave is desecrated.

This is bitter, unflinching, dynamite stuff, which doesn’t even need an actual haunting when the characters are so metaphorically haunted by Charlie’s passing.

Unfortunately, Hereditary’s pacing suffers, and debut director Ari Aster doesn’t put his foot on the gas after the near-vehicular manslaughter leaving a noticeable sag in the middle (this is a 127-minute run-time)

Annie (Toni Collette) is a miniature artist, and this is used to maximum effect in Hereditary very quirky and arresting opener. However, with each successive pass this becomes more and more precious and affected as she buries herself in her craft to escape.

Still, the good outweighs the bad, and the ending’s super fun too.

When Breaking Bad creator Vince Gilligan spun off the show’s charmingly dissolute counsel and  infomercial chiseler, Saul Goodman, it was a natural fit. After all, the glib litigator stole every seen he was in, thanks to Bob Odenkirk.

However, with El Camino: A Breaking Bad Movie, Gilligan had his work cut for him: building an epilogue around perma-scowl ne’er-do-well Jesse Pinkman, a dimwit brought to life as foil for Walter White, who couldn’t have existed without him — all id to White’s superego.

With this sequel and coda to the Breaking Bad series, Pinkman is on the lam playing catch me if you can, having busted loose from the Brotherhood’s razor-wire meth compound, and leading the 6 O’Clock news in Albuquerque with his drug dealer exploits.

He briefly meets up with larrikin buds Badger and Skinny Pete for a new ride, shave and a shower before he’s off trying to track down Ed Galbraith, the fixer/Saul Goodman contact who give cons new identities and helps ferret them out of town.

In El Camino Gilligan plays to Pinkman’s (Aaron Paul) “do now, ask questions later,” impulsivity (call it a strength if you must).

Gilligan crafts a film noir “what to do with all this money?” set up, which careens like Badger’s Pontiac Fiero.

Flashbacks to Pinkman’s captivity, plus tête-à-têtes with Walter White and Mike Ehrmantrout help keep things chugging along, but it’s those characters’ small roles that underscore just how big and vital these were to developing Jesse Pinkman. With the White sit-down particularly, the sparks fly as the ex-mentor presses his charge, Jesse, about what major he’d choose if the unlikely college candidate were to choose that route. It turns out, business with a focus on marketing, and White suggests he could teach these.

In El Camino, these wordy exchanges are lacking, perhaps because of time constraints, in a format that doesn’t lend itself to them, but that’s what made Breaking Bad so charming in the first place.