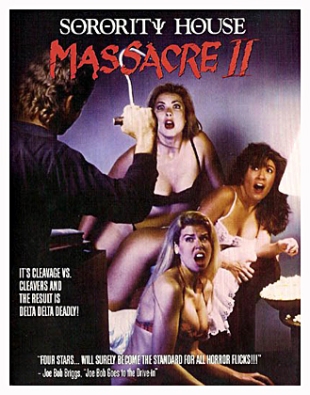 Five sexpot sorority sisters track down a real estate bargain…a downmarket California mansion that they can put in a low-ball offer for without an inspection? That’s just speculation on our part, as the abode in Sorority House Massacre II: Nighty Nightmare is a real fixer-upper. In real estate parlance, it has “good bones,” but nothing else (nothing else except…BAD MOJO…ominous cackle).

Little does the fivesome know, there’s a heavy breather neighbor peering at them behind his drapes across the way. Luckily, the girls busy themselves tackling beer and tequila and within the first 7 minutes, the Greeks* are given the particulars about the “old Hokstedter place,” by one of their own, a Goth-lite named Janie.

The new sorority digs was “the best they could do for the money,” and we know what that means in horror. But that’s the first of their (many) mistakes, the others being, taking part in elaborate seance (and in the midst of a nasty storm to boot) and letting their greasy neighbor in to regale them about how the bodies were found.**

This is pretty audacious, gonzo film-making. Director Jim Wynorski, a year after making the send-up, Transylvania Twist (featuring a self-parodying Angus Scrimm in Tall Man form) returns to helm what is a straight-ahead slasher with a, uh…twist: flashbacks from a different movie entirely. Yes, as the girls get backstory aplenty, it’s paired with flashbacks from The Slumber Party Massacre! Guess oversights like this can be expected when a film’s entire production took about a week and a half. 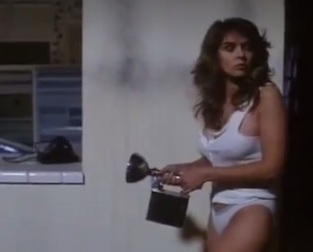 Sorority House Massacre 2 follows the girls-in-a-house motif, established in Black Christmas, and carrying on through Halloween and up to any number of seemingly interchangeable “massacre” movies.

There is lots of door jiggling, a basement animal trap, which became a hallmark of horror in the 2000s, and of course, copious screaming.

Not much to be said about this sequel, but it does feature a few Wynorskian touches: to wit, lingering, and what some might call gratuitous, shower and strip sequences.

(*Fraternity/sorority colloquialism; **reiterated by a cop: it was a “real butcher job, body parts were scattered all over the house, fingers in the sink, scalps on the mantel, guts cooking on the oven.”)