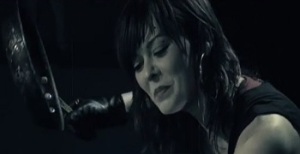 The Craving features a Spanish American chef/owner of Diabla Pica (Devil’s Spear) who skewers her way through the lesbian population of San Francisco while wowing patrons with her paella and serrano ham.

The opener is a grindhouse version of the Psycho shower scene. The buxom star of Voluptuous Biker Babes who’s moisturizing her eyes with cucumbers and having a relaxing bath, is hacked to bits by the killer, who’s got impeccable knife skills (naturally). After cleaning up the scene, she pops the bloody cucumber into her mouth and savors it.

The killer “who’s always had a great olfactory sense,” sizes up her victims like potential menu items: “you’d make a tasty, seafood medley!” She definitely puts the chop in cioppino.

The first half is a wild ride of Eating Raoul meets Maniac (there’s even a frying pan murder!), great for those with a healthy appetite for pure sleaze. But no Michelin stars are awarded later, as things begin to unravel.

As bodies pile up, residents of The City by the Bay, start to get concerned (there’s a hilarious web newspaper headline in the fictional Golden Gate Post that’s obviously a Word doc!).

The FBI begin to sniff about, with the least efficacious police work imaginable.

One of the dejected detectives says “the guy we picked up yesterday is clean,” after a lead falls through. However, it doesn’t take the entire cast of Law & Order: SVU to figure out that all the victims were lesbian, they all were found in various states of undress, and there was no forced entry…which would lead anyone with even a smidgen of common sense to deduce that the killers and victims knew one another and that the killer was…A WOMAN!

Anyway, a former lover/pastry chef Celeste von Wilder, gets suspicious when the butcher chef is courting the food critic from Food & Wine Magazine (see picture above). She tails the Le Cordon Blood to her apartment and witnesses some one of her handiwork.

Tinkering with a few of the menu items, could’ve made The Craving great.

One thought on “The Craving”