With Gordon Ramsay now barking marching orders at kids in Master Chef Junior, it seems like the food landscape is losing topsoil.

Bitter Feast isn’t our first  entry into the genre: We reviewed The Craving, about a serial killing celeb chef in San Fran whose specialty was paella. Paella with… BLOOD! Kidding.

In a culture for the most part lacking in material wants, some might see the obsession with how food is ostentatiously and publicly prepared as a harbinger of end times. These people are no doubt right, but there’s something more to it than that: at the heart of plebiscite reality shows, what’s being judged is craftsmanship. That goes for whether someone is building a deck, warbling Aretha Franklin or getting a rise out of a cheese souffle/a Gordon Ramsay.

At Really Awful Movies, we’re in the business of criticism. So the idea that an antagonist would turn the tables on a critic, made us shiver in our boots.

NY Times food critic Ruth Reichl famously donned disguises to review restaurants (For those who are interested, Garlic and Sapphires is a pretty neat read). In Bitter Feast, prickly food blogger JT Franks could use a disguise as well, as he’s hunted down and kidnapped by a celebrity chef / TV personality Peter Gray, who felt the sting of his poison keyboard.  The nasty reviews spurred Gray’s exit from a high-end New York boîte and sent his career south. Here revenge is literally a dish served cold.

Franks is shackled in a basement in Upstate  New York and gets a taste of his own medicine, forced to cook the perfect sunny side up egg and steak or face a wrath far more sinister than a dressing down from Chef Graham Elliot.

Franks’ spurned girlfriend, meanwhile, is tailing him with a private investigator. 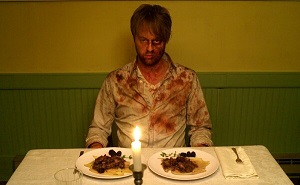 There’s five minutes of Molto Mario Batali as the restaurateur who drops the hammer on Gray, sending the cordon bleu into a tailspin. For some reason, the ginger chef dominates the DVD extras, waxing poetic on the state of the food business in an interview which is double that of his screen time.

A neat premise is matched with appropriately lush surroundings but Bitter Feast is bitter sweet: there’s enough silliness and overreacting to sink it.

Given the cynicism directed at crappy daytime cooking shows in Bitter Feast, Batali’s involvement is all the more weird. It’s one thing sending up one’s image as a chef, it’s quite another deriding how he’s earned his living of late.