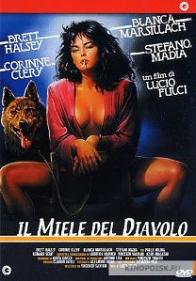 We’ve covered a film from Italian legend Lucio Fulci’s golden period as well as a film from late in the maestro’s eclectic career. Coming in between is 1986’s Il Miele del Daviolo (The Devil’s Honey). This soft-core, psycho-sexual thriller is another strange detour for the great director as to the uninitiated it appears more like something that Jess Franco or Joseph Sarno would have made rather than the man who brought us unparalleled gorefests such as Zombie and The Beyond.

The film begins in a recording studio where a man is playing a hot and heavy saxophone piece. Some disclosure here: When I was in junior high music class, I was assigned the tenor sax. Not giving a shit nor wanting to lug the heavy instrument home every night to practice, I simply mimed fingering movements during band practice while blowing indiscriminately into the instrument. Even then, I was more convincing at playing the sax than this Johnny. I mean his mouth clearly isn’t even moving at all, and he’s supposed to be this world-class instrumentalist recording his second album!

After his run through, a gorgeous woman named Jessica barges into the studio. She begins eating his face in the act of making out. Soon her left breast is exposed and they’re really going at it. Now remember, this is in full-view of the producer, the recording engineer and others. The others decide to break for coffee and Nicki the producer is understandably miffed at this interruption in the recording process. I feel for you Nicki – studio time is expensive!

With the room clear, Johnny dedicates a song to Jessica. He plays on his knees while the bell of his instrument goes you know where. Jessica’s writhing and undulating to the atonal rhythm is painfully comical – and don’t ask where the drums and female vocalizations are coming from.

Running parallel to the ballad of Johnny and Jessica is the story of Dr. Simpson, played by Brett Halsey (The Return of the Fly, Touch of Death.) Dr. Simpson has just successfully competed an operation when he calls to inform his wife that he’ll be delayed coming home as he has another procedure to perform. What his wife may not know, however, is this procedure is more gynecological than surgical.

The doctor meets a prostitute in a hotel room. She notices a run in her stocking and proceeds to repair it with red nail polish which she soon applies everywhere, and I do mean everywhere. This has the effect of driving the doctor mad with lust. When they finally engage in sex, the good doctor lasts all of eight seconds before rolling off and unceremoniously telling the prostitute to vamoose. He leaves the hotel, unaware that his wife is following him.

Back to Jessica and Johnny. They’re doing it in their stairwell and Johnny goes where Jessica nor the Bible wants him to. Like rabbits these two! Post coitus, Jessica is understandably miffed and tells Johnny to go away, but he ignores her pleas and repeatedly circles her on his motorcycle before falling and hitting his head on a rock. At the same time, Dr. Simpson and his wife are heading for a night on the town when she confronts him about his extra-curricular activities and informs him she wants a divorce. The doctor’s response: “There’s a cab stand. Take a cab and fuck off!”

Back in the studio and Johnny is recording another sure-to-be hit single while clad in a garish Cosby sweater. Soon he’s sweating profusely and passes out. He’s rushed to the ER where a distracted Dr. Simpson fucks up the operation big time, resulting in Johnny’s death.

A grieving Jessica (who’s also carrying Johnny’s baby) blames Simpson and wants revenge. She calls him repeatedly, asking “Why did you let him die?” Finally, she puts on Johnny’s Cosby sweater and heads out into the stormy night. She hides in the doctor’s vehicle, and when the doctor gets in, she puts a gun to his head and forces him to drive to Johnny’s house. There she chloroforms him, and when Simpson wakes, he’s bound to the wall with a noose around his neck and ferocious dog nipping at his heels.

The rest of the film deals with Jessica’s torture of the doctor – alternately physical, psychological and sexual. She bludgeons him in the face with an ax, makes him eat dog food, drags him by a leash through the surf while threatening to drown him, and pours melted candle wax on his back which has the effect of emitting plumes of smoke as if it were Sulfuric acid instead. She also allows him to pleasure her where he lasts his customary eight seconds.

The Devil’s Honey is another strange curiosity from Fulci. There is no gore to speak of, but Blanca Marsillach as Jessica does spend about 85% of the film in some form of the altogether. Depending on your perspective, the film’s ending is either wonderfully ambiguous or anti-climactically abrupt. Furthermore, though the running time is brief, the film still seems to meander. In the end, recommended for Fulci completists only which I thankfully am.