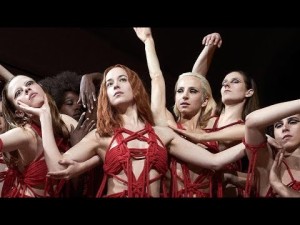 When The Rite of Spring premiered in 1911, Parisians cat-called, protested and even brawled in the audience. It’s hard to think of something as genteel as the ballet eliciting such reactions today. But here we are with Suspiria 2018, the balletic ballet horror film which has bifurcated gore-hounds. Luckily,  nobody’s come to blows.

Oscar Wilde often warned against the permanence of truth claims in art, which has been borne out when you see how the likes of jazz and impressionist paintings are received today compared with their debuts: casual indifference. They’ve faded into bourgeoisie acceptance.

While its detractors feebly point out that its cinematography is out of date and its story-line, quaint, the original Suspiria is still held in very high regard (not the least of which by us here. It’s in our Top 10 Horror Films of all Time). So, when Luca Guadagnino came along with the brass balls to remake the beloved Argento masterstroke, the pre-reception to the announcement foretold a Stravinsky-type blowback.

And so it goes. You’re damned if you do, in these circles.

But IF you do, do it Guadagnino style and go for broke. Unlike David Gordon Green’s beat-for-beat retread of Halloween, which, despite getting the Carpenter imprimatur remained “stuck in the mud” as Conor McGregor might say of his opponents, Suspiria 2018 is VERY DIFFERENT from its predecessor. And hell, that’s half the battle right there. Halloween 2018 is “everything to all people,” but ultimately signifying nothing. And for all its many faults, Suspiria is a force to be reckoned with, and deserves treatment as an independent entity.

Gone is the simple witch story, as well as the luscious pinks, reds, and blues you get from a Dario vision (instead, the film’s starkly bi-chromatic…with a palette not unlike The Witch, speaking of covens). Gone is Suzy Bannion’s teen innocence. In its place, oodles of backstory, gobs of historical context, lots of internecine witch squabbling, and most noticeable, dancing aplenty. The role of the psychiatrist is amped up, and like its forebear, there is spectacular (and hugely memorable) violence. 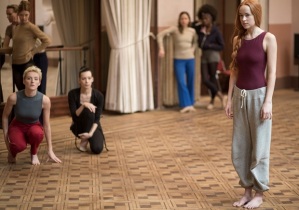 Dakota Johnson is gorgeous, game, and physical. And Tilda Swinton outstanding. Still, there are bits of howler dialogue where you half-expect Dieter from Sprockets to pas de chat across your screen. The Red Army Faction / Baader-Meinhof Gang + Nazi subplot is confusing, and tethers the film glumly to history (compared with Argento’s uniquely otherworldly sense of place, inspired by Snow White). And if it’s one thing both detractors and boosters will concede, this one’s criminally overlong.

Still, there is just too much funky weirdness and atmosphere to dismiss it. Time will tell how Suspiria will be remembered as we sit back, enjoy, and digest.

[Listen to our discussion of the new Suspiria film on the
Really Awful Movies Podcast!]