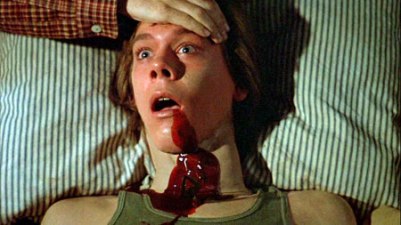 ARROW: An arrow in horror films is both a career vector, a weapon, and a metaphor.

Johnny Deep was “introduced” in A Nightmare on Elm Street’s credits. (As Cinema Sins put it, “it’s hard to think back to a time when Johnny Depp needed introduction,” but it’s true). The slight and vertically-challenged Depp, miscast as a star quarterback, is soon imbibed by a bed as a victim of The Springwood Slasher, Freddy.

And speaking of beds,

while Kevin Bacon was relaxing in his bunk, he got his jugular pierced with an arrow through bedding in Friday the 13th, a horror movie death that’s reprised in the terrible Friday the 13th 2009 reboot.

It’s also interesting that Suspiria (2018) director Luca Guadagnino ambiguously refers to his cinema as “an arrow that flies through time.”

[Editors’ note: And of course, there’s Arrow Films, the extraordinarily awesome British independent distributor of cult, horror and classic films on Blu-ray and DVD, including the super-cool Candyman]