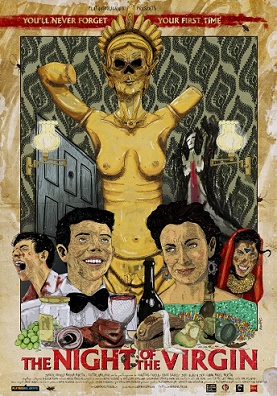 Never realized how much vomit looks like polenta. Or maybe it’s the other way ’round. Regardless, The Night of the Virgin (Spanish title: La noche del virgen) features a plethora of puke and a bevy of other bodily fluids that’ll put you off your dinner.

This is one slippery movie that should come with a sign, CAUTION: Wet Floor.

The setup couldn’t be more simple: a buck-tooth trollish fellow (Nico) whose advances are being repeatedly turned down in a Bilbao bar on New Year’s* finally gets lucky — or so it would seem — when he connects with an enticing older woman (Medea) in a green dress after the stroke of midnight.

They head back to her sprawling apartment as young Nico gets Snapchat “granny f-er” ribbing from his larrikin pals back at the bar who demand pictorial evidence of his soon-to-be-conquest, or else it never happened.

Medea’s pad is a real dump. It’s riddled with cockroaches (that alone should be an impediment to romance), but when Nico finds a vial of menstrual blood in her bathroom, he starts asking questions – the answers to which include an involved tale of Nepalese fertility rites (no really) and a budding romance that’s interrupted by her thug boyfriend, Spider, banging on the door. 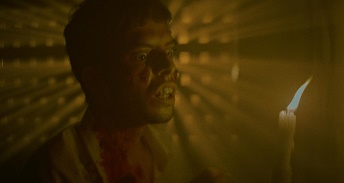 It’s always a pleasure to see things you’ve not only never seen before, but also cannot be reproduced here without running afoul of Google search engine propriety. Let’s just say that something’s stuck where the sun don’t shine and leave it at that.

The Night of the Virgin (hard not to think of Andy Warhol’s Dracula and its “wergins” when you read that word) is one eccentric and inspired, gory candle-lit horror, blacker than black and as charming as it is unpredictable.

While not reaching the same heights of, say, Baskin, it’s richly deserving of its accolades, and probably one of the better horror films of 2016, marred only by over-length.