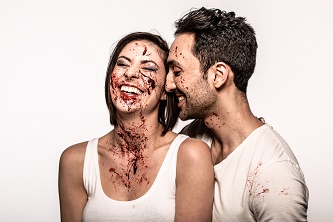 Capture Kill Release is manipulative as hell. But in the best possible way.

Every fright box is systematically checked off to produce something that rises above its found footage conceit.

From the city that brought you the Ken and Barbie Killers, Paul Bernardo and Karla Homolka, comes this tale of Toronto lovebirds looking to lose their “kill virginity.”

Jennifer and Farhang do this by first going about the banal business of choosing who to snuff out, striking off from their list gays (don’t want it to look like a hate crime), the young (don’t want to look like a pervert), the old (that’s just wrong), the disabled (ditto)…

There’s gruesome gallows humor aplenty as they whittle away their choices before settling on a victim, a local vagrant who is far from his first choice, and not exactly hers either. (Jennifer has her sights set on a loudmouth stockbroker-philanderer type, but lets impatience get the best of her.)

True to life, there’s a dominant partner in this sociopathic duo, and they’re both very bright, playing nicely into the (wrong) though relatable serial killer with a surfeit IQ stereotype (This is a pretty talky, whip-smart flick, and might not have worked as well with a Henry: Portrait of a Serial Killer lunk-head twosome dynamic.)

It’s pretty Jennifer (a dynamite Jennifer Fraser) who’s wearing the pants, leading a reluctant Farhang (Farhang Ghajar) through hardware store purchases, trial-by-cat and prepping for the grisly business at hand by testing out whether their tub is large enough for a proper human bloodletting.

And Jennifer’s directing things in other ways as well.

Yes, this is found footage, with her behind the camera for the most part, and yes, there are some hiccups associated with that as a device. However, much like the maligned sub-genre’s better exemplars (America’s Deadliest Home Video), the self-filming doesn’t overstay its welcome and is quickly forgotten, possibly because it’s not the viewer who’s made nauseous as much as our antiheroes. Case in point: the painstakingly deliberate, smelly, and very thorough disposal of their first victim’s body.

It appears easy in Dexter and is played for laughs on The Sopranos (see, the Cold Cuts episode), but disposing of a body is a tough grind and is shown here in vivid and very bloody detail.

But where Capture Kill Release really shines is in the mind, through psychological choices. Jennifer’s adorable mother is brought in early on for contrapuntal irony, and there’s a certain sweetness to their rapport. The same can be said of savage Jennifer’s encounter with the poor homeless victim, the all-around mensch, Gary.

For further audience investment, there’s some relentless pet-abuse too, and some related factoids that’ll give you shivers if you live in a high-rise.

Proof that there’s lots you can do with a little, Capture Kill Release was understandably well-received at Toronto’s Blood in the Snow Festival.