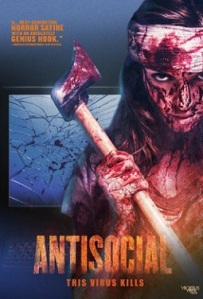 “Bash her head in. OK, that was a bit harsh but we know what happens next.”

Indeed. And we as viewers know the road-map fairly well too. Antisocial though, offers up a scenic route of hallucination and social media to make it marginally stand apart from its virus zombie brethren.

Set on New Year’s Eve, with the neo-Gothic turrets of the University of Toronto a backdrop for some generic Pacific Northwest college, we’re introduced to the cast via a Facebook-like social network, which, it has to be said, is recreated with careful attention to detail (as are the subsequent news reports).

There’s a dribble of backstory as Criminology major and tomboy Sam is dumped via video chat by a boyfriend, a guy with a clearly wandering eye. She’s then convinced to hang out with her friends over drinks rather than wallow in New Year’s self-pity.

There are sudden media reports of a disturbance in  one of the “residences,” betraying the Canadian-ness of this feature (it’d normally be called a “dorm” stateside, FYI). However it isn’t a lacrosse team on drunken bender; it’s coeds behaving very erratically.

Because everyone’s tethered by dendritic online connectivity even as they should be in celebration mode — these are millennials after all — and party-goers quickly get their updates online. Good on them. The authors of this site would be caught blissfully unawares.

We quickly find out that the breakdown in the social fabric is a widespread, global phenomenon, characterized by bleeding from the nose and ears and the aforementioned hallucinations. And it’s the latter from whence the frights are found. There are some bona fide Nightmare on Elm Street-like scares involving entrails.

It’s the social media stuff though, that sinks Antisocial a bit. Watching people video chat and update profiles doesn’t make for interesting visuals and ebbs vitality from the narrative.

The performances are pretty good, but as far as a new media send up, this fails to indict a culture overly dependent on social media (assuming this was its aim). For those interested in something similar, always check out the more briskly-paced Mulberry St, in which a group of Manhattanites rally to protect themselves from the rampaging hordes.