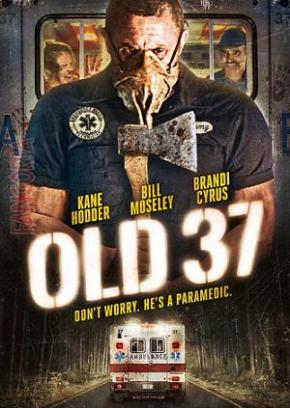 Despite the undeniably entertaining thrill of watching two genre vets doing what they do best, Old 37 is ultimately a tired, unoriginal mess of a film that is extremely difficult to recommend.

The film was directed by the uber-prolific Alan Smithee: the name directors use when they want to be disassociated from their films. In actuality, Old 37 was directed by Christian Winters from a script based on a nightmare that screenwriter Pat Travers had of being in a car accident and then being treated by two lunatics posing as paramedics.

One can’t blame Winters for not wanting his name anywhere near the finished product, as the resultant film is a poorly paced bore that features unoriginal plotting, idiotic and unlikable characters who make boneheaded decisions, implausible contrivances, and a waste of an admittedly decent premise.

The film begins with two young boys playing in a basement while their father listens intently to a scanner. Upon hearing of a car accident, he bellows “Let’s Go,” and the father races in an ambulance to the scene of a car accident, his sons in tow. While the kids wait inside the vehicle, the father approaches a girl who is bleeding out all over the pavement. “Don’t worry, I’m a paramedic,” says the dad as he asphyxiates the woman, pokes his finger around in her gaping wound and sucks on the blood. 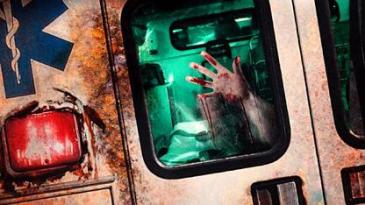 If you were to assume that with an upbringing such as this, the kids would end up two slices of bread short of a sandwich, well sir, you’d be right! The  boys, all grown up, are now played by Kane Hodder (Jason in Friday the 13th Parts 7 through 10) and Bill Moseley (Chop Top in The Texas Chainsaw Massacre 2 and Otis in The Devil’s Rejects.)  They too tool around in an ambulance, posing as paramedics while looking for victims to kidnap, torture and dismember in the dilapidated scrap yard they call home.

Now on to the victims. A more annoyingly risible bunch you’d be hard pressed to find. Perfectly attractive Amy is the requisite social outcast. She’s had a falling out with her best friend Angel (played by the hilariously third-billed Brandi Cyrus, sister of Miley, who has all of maybe three minutes of screen time and barely utters half a line of dialogue). Angel is now hanging out with the cool kids and has left poor Amy behind.

But lest you think that Amy will make for an inspiring, empowering final girl, think again, for Amy’s sole ambition is to get her breasts augmented. ‘Cause that will solve all her problem’s, right? And her widowed mom, who it should be said has a much more active social life than her daughter, is all for her high-school aged only-child enhancing what nature gave her.

Anyway, back to the cool kids. They play stupid road games, and pretty soon, Angel ends up splattered all over the pavement. The kids give some cockamamie story to the police and the (real) paramedics, covering up the fact that it was their asinine and irresponsible behavior which resulted in Angel’s death. And this isn’t the first time that driver Jason committed vehicular manslaughter either (a fact which proves germane to the motivation of the antagonists).

Soon, some off the cool kids start to go missing, others investigate (one who constantly brandishes a video camera because that seems to be de rigueur in horror movie these days), grisly fates are met, and it’s all par for the course. The final third does feature some nice carnage and bloodletting if that’s your thing (and it is ours), but it’s really nothing that hasn’t been seen before.

Now on to Messers Hodder and Moseley. They’re a treat as always. Hodder does what he does best, which is portraying hulking menace and malevolence without uttering so much as a word. And his “chicken dance” is something to behold.  And Moseley spits out invective and insults as only he can. No one else could utter lines such as “You fucking retard!” and “Once you’re behind the gate, it’s too late!” with the same conviction and derision as Moseley. These two are real pros; it’s the rest of the film that’s amateurish.

Old 37 proves that just because you have the means to make a film (like last year’s worthless piece of dreck Muck, this one too was crowd-funded), doesn’t mean you necessarily should. The director was wise to use the Alan Smithee appellation. In doing so, he showed much more sense than anyone else involved in this film.