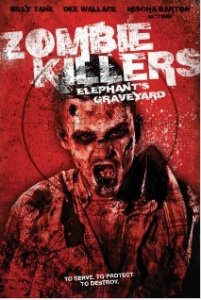 Survivors holed up in the town of Elwood, use paintball guns and padding to train for killing zombies that encroach on their territory, all the while referencing lines from superior fare such as Die Hard, Jaws and They Live.

A little self-awareness goes a long way, but in the opening voice-over zombies are disparaged for being slow-witted and slow-moving. As an opening conceit, this would work well for a movie in which the opposite is true, not for a film that confirms prejudices.

Anyway, in this town, infected people are “evicted” and tossed outside the city gates at the behest of “Doc,” a burly, measured academic in the vein of Neil deGrasse Tyson.

A young surfer-dude type Ian, asks his cynical girlfriend, “can’t we go to a better place?” And she replies, “what if Elwood IS the better place?” Astute viewers will recognize this as a variation on a verse from Corinthians or what some Christians say when a person has shuffled off this mortal coil.

Someone’s got some atoning to do.

Here’s a very dumb premise: the pandemic seems to have been caused by natural gas fracking. Fracking hell!

Billy Zane is an ex soldier and second in command. He overacts like a bladder after three espressos and Mischa Barton is rough around the edges as a pregnant wife to a weird, bearded Svengali. There are also really bad CGI deer (as an aside, it seems odd to deploy CGI for of all things, local fauna when you’re making a zombie movie).

Too much yak yak yak. No ass-kicking, no bubble-gum. 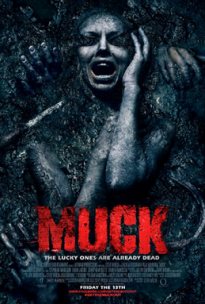 Muck is an apropos title for this one as it’s perpetually wallowed in the mire. When the most entertaining part of first-time writer/director Steve Wolsh’s film is the closing credits, you know you’re in big, big trouble.

Giving credit where credit is due, Muck starts rather unconventionally for a horror film. Instead of spending the first 20 or so minutes on exposition – introducing us to the characters; exposing their respective traits and peccadilloes so we know who will be picked off first and who’ll remain standing when the curtain calls, informing us where they’re going and why – Muck begins après attack.

As the film begins, we find one of our heroines  standing terrified, shaken, filthy and clad only in her underwear somewhere in a New England marsh. She’s soon reunited with her companions. Well, not all, as one or two have already been slaughtered. The rest are equally terrified and one is on his last legs, bleeding out yet still lucid enough to pepper the banter with witty, self-aware comments about being in a horror film (see above.)

Seeking shelter from whatever storm they just faced, they find a house whose residents are nowhere to be found (naturally) which sits in the middle of nowhere (but of course). Once inside, they find that despite being nicely furnished and featuring all the mod cons, the house lacks a telephone (surely.) One, Noah, leaves to find help (yep) and the other four stay to bicker and get drunk (because that’s just natural behavior when one of your friends is dead and another is dying).

Noah’s girlfriend goes into the basement and is attacked by a group of bald, pasty, albino-like antagonists with strange scarring all over their torsos and faces, one of whom is played by Kane Hodder of Jason fame. Meanwhile, as his girlfriend is being beaten, brutalized and god knows what else, Noah leisurely enters a bar to try and find a phone.

Eventually, Noah (who thinks better of calling the police, because really, why would he want to do that?) reaches his cousin Troit whose in another bar holding court with two ladies. He tells Troit he needs help, mentions he’s in the town of Wes Craven (hilarious), and fails to inform his cousin about exactly what is happening nor the address of where he can be found. Thus, is it any wonder that Troit has zero urgency in helping his cousin and chooses first get a little more inebriated before heading out? 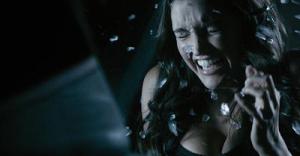 We’re also treated to a protracted scene of Troit’s date, played by 2012 Playboy Playmate of the Year Jaclyn Swedberg, enter the bar’s bathroom to try on an array of bra and panties because all women carry the equivalent of the entire Victoria’s Secret catalog in their purses. She spends 10 minutes posing and making duck faces in the mirror before selecting a pair and rejoining her companions. There’s a lot of T&A in Muck if that’s your thing (and it is ours), but when it stops a film dead in its tracks like it so often does in this one, it’s less titillating and more infuriating.

Noah and Troit (whose one of the more obnoxious, hateable characters this reviewer has ever come across) eventually convene at the house, learn that everyone is basically dead and have to battle the baddies in a fight to the finish. Yet the film ends so abruptly, we don’t even get that bit of resolution.

To put it bluntly, Muck sucks. Apparently a fully-funded Kickstarter prequel is in production. Perhaps it’s not too late for the backers to get a refund.

2 thoughts on “Zombie Killers and Muck”