It’s not surprising there are Valentine’s Day horror films that associate the Hallmark holiday with blood and guts. The foundation was laid by syphilitic mobster Al Capone when he orchestrated the St. Valentine’s Day Massacre in 1929 (check out the Roger Corman production of the same name). Interesting factoid: one of the authors of this site shares a surname with Al Capone’s consigliere but rest assured, isn’t connected (or at least, isn’t willing to say so).

We thought we’d orchestrate a plot of our own (Irish mobsters needn’t run for the exits) — to visit five Valentine’s Day Horror Films. 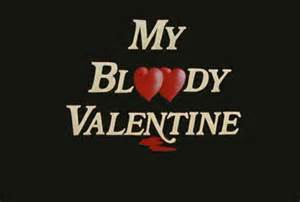 Like its fellow Canadian cousin Black Christmas, 1981’s My Bloody Valentine is the ne plus ultra of slashers set on its respective festive day. Quick, dirty and super-gory (make sure to get the unrated version) MBV is the box of chocolates to chu-chu-choose.

The mining town of Valentine’s Bluff (pop. 3,785 and soon to dwindle by at least a dozen) is gearing up for its first big Valentine’s Day Dance in 20 years. Why the hiatus? Well sir, it seems 20 years ago all the miners were in the Union Hall along with the rest of the town, drinking and cavorting. All save seven that is, as five were still down in the mines while two supervisors waited above.

The anxious supervisors couldn’t wait to get to the dance and crack open a frosty Moosehead, so they left the others without bothering to check the methane levels. The mine ‘sploded real good and the five were buried alive. Only one survived – Harry Warden. When rescued, Warden was found gnawing on the arm of one of his fellow miners. Warden took his revenge by killing the two supervisors and removing them of their hearts. He also vowed to come back every year on the 14th to kill again if another Valentine’s Day dance were to be held. Bitter much, Harry?

Twenty years later and Harry is assumed dead, but when the town sheriff is mailed a heart-shaped box containing an actual human heart and the body count begins to rise, the town calls off the dance. The disappointed kids, including romantic rivals Axel and TJ (sounds like a bad 70s cop show), decide to throw an impromptu bash of their very own. Soon a few wander off into the mine where they meet what appears to be the homicidal Harry. 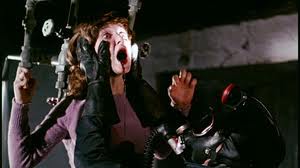 Quentin Tarantino’s all-time favorite slasher flick has lots of good, gory kills. However, the standout is Mabel, the dance organizer and local laundry lady, who spies a box of chocolates at her launderette. Soon she’s face-to-face with Harry in full mining gear and mask who kills the old biddy with a pickaxe. Her heavily charred corpse is later found stuffed in a dryer set to spin.

Originally titled, Be My Valentine’s, or Else, Hospital Massacre has another shoe-horned in backstory, just in case the audience couldn’t accept the premise of a doctor violating both patients and the Hippocratic oath.

The murder doc as a boy leaves a Valentine’s Day card for the prettiest girl in school and when he’s rebuffed, he strings her brother up on a hat rack.

Fast-forward (as you might be inclined to do anyway because this one is a focus group horror) a few decades and the girl is all grown up and goes in for what is supposed to be a routine checkup….and…well, this movie isn’t called Hospital Massacre for nothing!

A nurse is shoved into a doctor’s office closet and stabbed repeatedly. Good night, nurse!

From the director of Urban Legend comes this even more tepid by-the-numbers 2001 slasher. Valentine’s Day 1988 and bespectacled, buck-toothed loser Jeremy Melton is asking all the girls at school for a dance. The geeky kid with the propensity for nosebleeds is turned down by all. That is all but rotund Dorothy. Not only does she say yes, but soon she and Jeremy are swapping spit under the bleachers. A group of “cool” kids discover them and a humiliated Dorothy claims that Jeremy attacked her. The kids pour punch over the twerp and pull him out from under before stripping him to his underwear. Oh the humiliation!

Thirteen years later and the girls, still friends, are played by the likes of Denise Richards, Mary Shelton and Katherine Heigl. One by one, they receive a morbid Valentine’s Day card in a red envelope before being slaughtered by a lame killer wearing a stupid looking cherub mask. Could Jeremy be back to avenge his adolescent trauma? 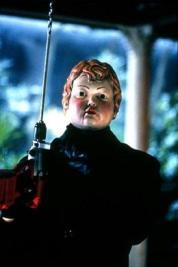 Valentine is the sort of post-millennial, cliché-ridden, pulling-all-its-punches horror we really dislike. The scares are nil, the kills are so pedestrian that  they require comfortable Insoles and it’s virtually bloodless.

As such, nothing really interesting happens. If pressed, it would be the moment when one of the girls bites into a chocolate sent by the killer and finds that it’s full of live maggots. Other than that brief bit, this lame Valentine deserves to be rejected – not just on Valentine’s Day but everyday. 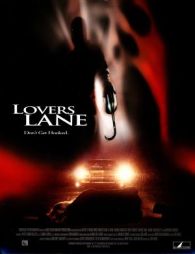 The killer with a hook for hand is the classic urban legend, forget about how inefficient this is for killing unless the killer is a marksman with his other hand. In Lovers Lane, a maniac lays waste to amorous victims and is institutionalized a la Rob Zombie’s Halloween remake and er, a hundred or so other movies.

Jokester Doug is caught by The Hook who uses said hook to…paw at his pants! What good is a hook if you’re just going to knife your victims? 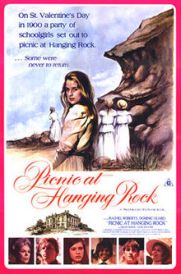 We’re about to get arty on y’all with 1975’s Picnic at Hanging Rock from celebrated Australian director Peter Weir.

It’s Valentine’s Day, 1900 and a group of girls and staff from Appleyard College, a girl’s boarding school in Victoria State, Australia, take a trip to picnic at Hanging Rock (so that’s where the title came from!), a volcanic geological formation 500 feet tall. After cards are opened, lunch and tea are consumed and the Valentine’s Day cake is cut, a group of four girls go to climb and explore the rock. They fall into a slumber, and upon waking, one girl watches in horror as the other three wander trance-like into a grove in the rock. She runs back in a panic and it’s later discovered that a teacher has also disappeared along with the three girls.

Picnic at Hanging Rock is an art film that has more in common with Ingmar Bergman than Sean S. Cunningham. It focuses on the aftermath of the disappearance and its effects on the remaining students and staff at the school rather than the mysterious disappearance itself. The movie raises many questions yet answers very few. It is, nonetheless, a haunting film that is well worth a watch. It also features a small carnivorous plant and a snake, so there’s that.

Be sure to check out the REALLY AWFUL MOVIES PODCAST, where we talk about the best and worst of horror, sci fi, exploitation, kung fu and women in prison movies from the 70s to today.