The tagline is…There’s no recovery room at…Hospital Massacre…but shouldn’t it be Massacre Hospital? It’s also known as X-Ray and Ward 13 so perhaps there were some creative differences early on.

You want back-story?! You got it! A boy leaves a Valentine’s Day card for the prettiest girl in school and when he’s rebuffed, he strings her brother up on a hat rack.

Fast-forward (as you might be inclined to do anyway because of the less than stellar performances) a few decades and she’s all grown up and portrayed by playboy model and Hee Haw regular Barbi (yes) Benton who goes in for what is supposed to be a routine checkup….and

You want foreshadowing? You got it!
Her friend David: “Isn’t this the hospital where they had all  the trouble last year? Some patient ran amok or something.” 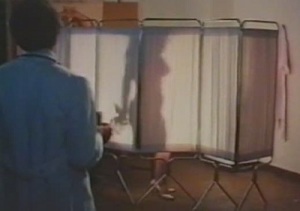 There are some great lines like when one doctor says to another: “I’d like an explanation of THIS!” referring to the silhouette of a buxom Benton changing behind a screen.

This movie answers the question, who gets a blood pressure exam while topless, followed by an inappropriate massage?

Anyway, the denouement is pretty easy to figure out. This isn’t an elaborate satire of the for-private healthcare system. It’s a guy in scrubs who goes all stabby.

A FANTASTIC soundtrack, lots of surgical implements, a few frights and a hospital that really takes energy efficiency to heart with all the darkened hallways.

[CHECK OUT OUR DISCUSSION OF HOSPITAL MASSACRE ON OUR PODCAST]