It’s the Casablanca of carnage and the Gone with the Wind of Gore…A case could be made that Maniac is the greatest slasher film of all time.

In the era when a killer’s motivations were as absent as their dialogue, Maniac takes you between the ears of maniac Frank Zito, closing the theatrical distance between audience and killer.

We know we’re in uncharted territory in the first scene when we hear his animalistic grunting and heavy breathing as he peers through a tower viewer and stakes out an amorous couple on the beach who he suddenly and quite violently kills.

As Fangoria aptly put it, “no mysterious masked killers and endless POV shots…” (a la Halloween and its ilk)

While The Scream Queen’s Survival Guide says: “Psycho is the mother of all mommy-issue horror movies” we’d say that film definitely helped birthed Maniac; we’ll abort that metaphor but as far as screen killings go…the scalping scenes? Those were just as influential to our eyes. They were done by special effects mastermind Tom Savini and were and still are harrowing and ahead of their time (Savini himself portrays a victim who’s offed in a manner similar to the MO of the Son of Sam — in a parked car with a girlfriend). 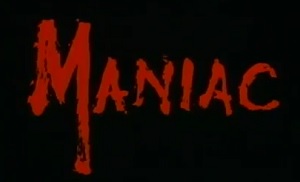 Frank Zito (played by the excellent Joe Spinell, who also gets co-writing credit) is a lumpy Vietnam vet tormented by memories of his prostitute mother killed in a car crash. He lives in a sleazy New York City apartment and terrorizes his Brooklyn borough in a bomber jacket and black wool cap armed with razors and shotguns.

Vincent Canby of the New York Times said this of Maniac: “watching him act like a psychopathic killer with a mommy complex is like watching someone else throw up.” We recall reading Leonard Maltin’s take, which actually got one of us to rent Maniac…He bestowed on the film his BOMB acronym — “bottom of the movie barrel” — calling the William Lustig masterpiece, “a claustrophobic, sickening film.” (Maltin also called The Brood a BOMB. May an IED obliterate his laptop.)

But what really makes Maniac top its period brethren — your Driller Killers, Mutilators, Jasons, what have you, was Spinell’s ordinariness, his banality of evil. The disquieting chats with his collection of creepy mannequins he decked out with victims’ hair were unforgettable, as was the harrowing hunting of a nurse through the MTA subway.

Mention must also be made of his awkward attempts at romance with hottie fashion photographer Anna played by Caroline Munro of Starcrash and Don’t Open Til Christmas. His giving of gifts and ordinary small talk, his tenuous facade of normalcy eventually morphing into delusional rage.

Director William Lustig was hugely inspired by Italian exploitation cinema, and Dario Argento returned the favor, helping him get distribution for Maniac in Europe (a few years later, fellow member of the Italian Mount Rushmore of Gore Lucio Fulci took to the mean streets of the Big Apple for a similar piece of unrelenting sleaze The New York Ripper).

The film’s tagline was “You can lock your doors, but you can’t lock the madman out of your mind.” He’s certainly stayed with us.