When they had torn open her shirtwaist, still damp with perspiration, they saw that her left breast was swinging loose like a flap, and there was no need to listen for the heart beneath.
The Great Gatsby

The car has become the carapace, the protective and aggressive shell of urban and suburban man.
Understanding Media: The Extensions of Man, Marshall McLuhan

Just when you think you’ve seen it all, you rubber neck.

Literally, a Freudian death drive, it depicts people for whom falling asleep at the wheel isn’t a concern, but who actually seek out the transcendent experience of the film’s very title. What’s been so off-putting to audiences is the acceptance of Crash’s premise: the “liberation of sexual energy” derived from crumpled steel. As sex advice columnist Dan Savage frequently points out, however weird people think their personal sexual predispositions are, they’re seldom alone and can find a community somewhere.

Like the open road, the Ballards (James Spader and Deborah Kara Unger) have an open relationship. 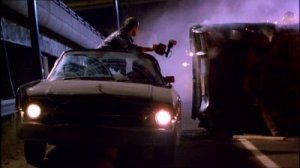 In the opening scene, Catherine Ballard is having sex on the wing of a gleaming Cessna with a stranger in a hangar outside of Toronto*. We then cut to film director James Ballard (named after the author of the source novel) having sex with his camera girl on the set of his latest film. This is right out of McLuhan here: “by an enormous speed-up of assembly line segments, the movie camera rolls up the real world on a spool…by speed up, the airplane rolls up the highway into itself.”

When driving home one night, Mr. Ballard is involved in a crash, the passenger occupant of the other vehicle torpedoes through his windshield and is killed instantly. The driver, Dr. Helen Remington, exposes herself to Ballard before being extricated from the wreck.

In hospital, Ballard’s physical setback isn’t going to keep him from indulging his sexual impulses as he and his wife get off as she’s telling him about the state of his wreck.

Ballard visits the impound lot to see his totalled ride and Dr. Remington is there. They have torrid sex in the airplane hangar and thereafter, she introduces him to the artistry of Vaughan, a crash reconstructionist who stages accidents involving famous people for an audience of the like-minded. This takes place on a deserted road by the railroad tracks, to continue in McLuhan territory.

They perform James Dean’s 1955 fatal Porsche wreck, with Vaughan the mechanic portraying Dean’s passenger, mechanic Rolf Wütherich who was thrown from the vehicle but survived (interestingly, only to be killed a few decades later in a drunk driving incident). Vaughan and his auto-erotic brethren express an interest in doing Jayne Mansfield next and Ballard and Remington accelerate their fetish.

Crash is fascinating. Cars feature prominently in horror films for obvious reasons: they represent sexual freedom (of the kind extirpated by lovers’ lane killers – see The Town that Dreaded Sundown and Maniac), they get people out of the urban milieu and into the woods and the break down at the most inopportune times. They’re seldom vehicles of sexual expression.

[Editor’s note: In a city obsessed with solving its terrible gridlock, it’s a bit ironic that the city of Toronto is featured in a film about speed. Our hometown though, creates a wonderful urban backdrop, especially the Gardiner Expressway, an elevated eyesore running along the lakeshore that many would sooner bury than praise, a la Boston’s “Big Dig” project. Adding to its villainy, concrete chunks of it regularly fall off and it needs constant and very expensive maintenance.]