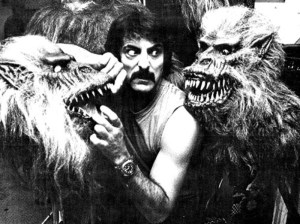 “Film is a truly magical medium. You can create illusions of reality, make people think they’ve seen things that they really haven’t — like blowing a guy’s head off with a shotgun.”

Horror depends on magicians. Men and women who know the secrets and have the ability to create illusions and deceptions. Those who can convince audiences of the veracity of aliens, mutated creatures, malformed backwoods killers and sundry decapitations, dissections, dismemberments and shotgun blasts. These magicians are the makeup and effects artists. 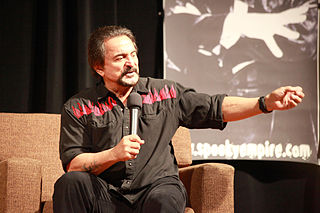 Rob Bottin, Dick Smith, Greg Nicotero, Stan Winston and Rick Baker are among the masters of this conspiratorial craft, but despite their formidable talents and undeniable influence, not many outside the horror and genre communities know their names. Then there’s Tom Savini. Standing apart from his peers, he is more than just a makeup man. Actor, director, in front of the camera or behind, Savini has bludgeoned his way through the horror ceiling and into the mainstream.

Why is Savini’s face and name known while his peers operate in relative anonymity? Is it his makeup work on such seminal films as Friday the 13th, The Burning, Maniac and Deads both Dawn and Day? Could it be his judging appearances on reality competitions Face Off and Halloween Wars? How about his unforgettable appearance in yellow on The Simpsons (“You sir, are a perfect patsy!”) 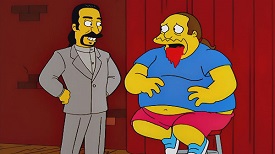 “That’s not a cookie, it’s a time-release blood pack. You, sir, are a perfect patsy.”

Or how about his many memorable turns in front of the camera, such as his roles in Dawn of the Dead, Planet Terror, Machete, The Perks of Being a Wallflower, Django Unchained, and his inimitable turn as Sex Machine in From Dusk till Dawn? There is only man in Hollywood who can list stuntman, actor, director and makeup artist on his resume and that man is Tom Savini.

One of us (Jeff) recently had the opportunity to chat with Savini at Toronto’s Horror-Rama convention. A relaxed and jovial Savini reflected on his career and shared his thoughts on his peers in the industry and genre cinema. 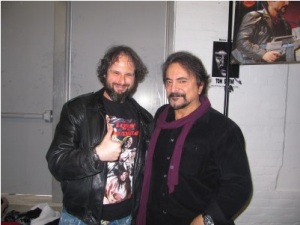 “When I was doing makeup, I always liked to play a part in the film I was doing makeup for. But acting is the toughest thing. You have to cry in 5 minutes. What will it take for you to make those tears…I mean…that’s what actors do. So that in a way is the same as makeup effects. In makeup, you create a character, and mentally, that’s what actors do because when your face is 50 feet high and 60 feet wide, you gotta believe what you’re doing. It’s a funny thing that’s going on. You’re sitting in the audience, pretending that what you’re seeing isn’t acting. The actors on the screen are pretending, but we all are part of this conspiracy of creation.”

“I read somewhere that happiness statistically among all walks of life is doing something. Starting from the beginning and seeing it through to completion…That supposedly is what happiness is. So happiness, it seems, is creating something.”

So what’s more rewarding [creating a creature from the ground up or working on a practical effect]?

“They’re all, I think, equally rewarding when it’s appreciated. You know, it’s like, students in my school…some of them have never sculpted before. And in the second semester, they have to create something that never existed and then make it come to life with animatronics. They’re so happy…It’s the Frankenstein syndrome. Dr. Frankenstein created something that never existed before. There it is! Alive! But you always look at it like I could have done that better. But a true artist is never done. It’s simply time is up!” 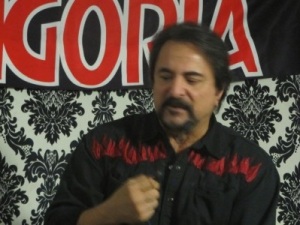 On practical effects vs. CGI:

“There’s a collective dislike of CGI…[but] even some movies that are coming up…they’re building real puppets, it’s gonna be real stuff. So right now there’s that desire to go back. Three major American visual effects companies have gone bankrupt because they’re sending it overseas. And it’s expensive.

But there’s more to it than that. If you watch American Werewolf in London, everything is happening right in front of you. You don’t have to pretend. When I saw Jurassic Park, I had to pretend that I’m seeing dinosaurs…I had to change my mindset to enjoy the movie because us old-timers…we don’t want to make the effort to have to pretend…we like to see it happen. Because there’s a lot of things CGI hasn’t mastered, like blood splattering, people falling, car crashes. So when you see stuff like that, it’s irritating. It’s supposed to be one of the tools that filmmakers use in their toolbox, and sometimes it works. The best make-up effects now are a combination of practical and CGI.”

“I wish I could go back and see a movie through the eyes of a child. I was a kid in the 50s and I saw The Creature from the Black Lagoon when it was in the theater, and that was a scary time because I 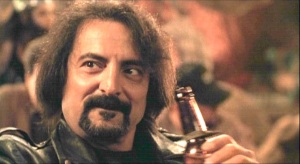 believed it was real. I believed Frankenstein was real. It’s very rare now when I can watch a movie and not think of [the technical aspects.] The Exorcist did it for me. Alien did it to me. I never thought, not for a second, about a camera angle or something. It was just scaring the hell out of me.”

“Never a competition; it was always a brotherhood. That’s why I loved going to movies. It was the latest exhibit from your favorite artist. And we helped each other. I called Rob Bottin before I did Creepshow because I had never made an articulated creature. And he showed me step-by-step how to do it. He was great. I would never know how to do it if it wasn’t Rob Bottin teaching me… Rick Baker just got his star on the Hollywood Walk of Fame…The greatest zombies that exist today are what Greg [Nicotero] is doing on The Walking Dead.”

Look for Tom Savini as the title character in 2015’s The Sadist.

2 thoughts on “Talking With Tom Savini”