If there’s ever an Academy Award doled out for Best Film in Which a Serial Killer is Dressed in Motorcycle Gear well we’ll have Night School, AKA Terror Eyes go helmet to helmet with Nail Gun Massacre.

But forget nail guns and killers who’d be the scourge of Habitat for Humanity builds…In Night School, a young Boston teacher’s aide is murdered quite ingeniously: she’s spun around really fast on a playground merry go round and has her head lopped off with a curved kukri knife as she’s making her rotation. Now, if she studied physics she’d know that the outward force is contingent upon mass and speed of rotation. She could’ve just let go and avoided the oncoming swipe but being shot out of a merry go round wouldn’t ultimately be that pleasant either.

Anyway, this event sets in motion both a police investigation but thankfully, no more science-related punning.

There’s a quick cut to the Quincy Mah-ket in Boston where a Hah-vahd educated detective Judd Austin is all sexed up with his paramour in his Beam-ah. Before the innuendo can fly and he can book a racket club table, he’s called to the murder scene and finds out the victim went to a local night school. The eponymous slasher then adopts the tone of what’s since become by-the-book police procedural banter:

Austin: “Why would he mutilate her over there, bring the head here and put it in a bucket?”
Beat cop: “You askin’ me? You’re the college genius, I’m just a cop.”

One of the murdered girl’s professors is immediately questioned as he’s rumored to use the campus as “a playground for his sexual exploits,” (gainsaid by his penchant for cable knits). 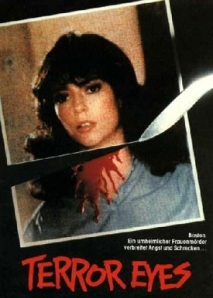 Because this is 80s horror, the academic doesn’t teach Biochemistry, 19th Century French Lit or Intro to Business Marketing but lectures on anthropology, describing creepy fertility rituals in Borneo:

Scenes like this are a direct link with man’s primitive past. Modern man has only to take a short step to wind up in the primeval jungle of his ancestors.

Um, OK. Could the murderer be the pompous prof, who also uses vials of red dye in shower foreplay rituals? (there’s actually an effective red herring Mise-en-scène that winks at the Psycho shower scene) Or could it be the slow-witted bus boy at the local campus haunt, the Lamplight Restaurant?

Night School marks the debut, shower and otherwise of the gorgeous model / actress Rachel Ward (The Thorn Birds, Dead Men Don’t Wear Plaid) as a research assistant. She would go on to do The Final Terror (which we haven’t seen) but features the stellar cast of Adrian Zmed (TJ Hooker), Daryl Hannah and Joe Pantoliano (!).

Anyway, the motorcycle killer ups the body count and according to police, “has a taste for the biz-ah!” and leaves a calling card of sorts (body parts appear near water in some way…at the aquarium, in beef stew, in the shower, in the sink, in a bucket….you get the drift).

Night School has more in common with Law & Order than oh, the hundreds of gore films set on college campuses (Quick examples: Splatter University, Sorority House Massacre, or Urban Legend, shot at one of our Alma maters, the University of Toronto and so forgettable Robert Englund makes no mention of it in his book).

There’s the usual editing right after the knife is about to make contact, the shutting off of the power pre-kill, the barking dog scare and “who’s there?” clichés but the denouement is surprising. Still, our 13-year old selves would’ve been disappointed by the minimal nudity and gore restraint.

One thought on “Night School”