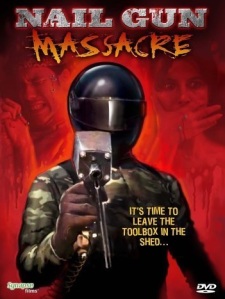 The elevator pitch for this one doesn’t even require going up one floor: Construction workers rape a woman and a mysterious vigilante who looks like a Power Ranger, exacts his revenge. He does this while wearing a motorcycle helmet. Safety first.

Who among us who isn’t presently under the employ of Habitat for Humanity, hasn’t thought of how cool it would be to fire off a few rounds into the fat ass of a particularly annoying boss?

The killer comes complete with 80s-style catchphrases (“Okay turd-face, cut the small talk”) and in his tool-belt,  enough anger to send many a victim to that great home renovation center in the sky. This 1985 flick was perhaps not surprisingly, about as ill-received as a house that’s not built to code. Still, it’s a lot of fun.

One thought on “Nail Gun Massacre”