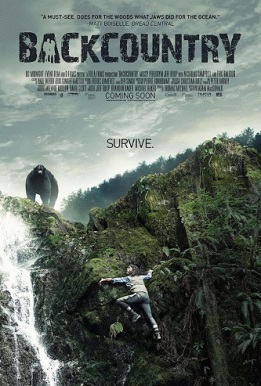 The reasons for fearing the outdoors in horror are four-fold: getting lost, hunted down by a slasher in the woods, accosted by a family of backwoods types, but rarely, getting attacked by an animal.

Backcountry hints at two of these, and delivers a third. And each is done well enough that the flick could’ve taken an unmarked path less traveled down any of ’em.

Couple Alex and Jenn leave the city (in this case, west Toronto) for a late-summer sojourn in the bush. She’s a newbie, he claims to know his way around the remote provincial park from experience going there as a kid (the meandering roadway to the park will warm the heart of any Ontarian, as will the ranger cabins where you check in before going to your campsite).

She’s packing heavy (flares/bear spray), he’s not. And adamantly so. He keeps her phone back at the car after reluctantly posing for a bush-selfie. Sure, it’s a dick move that stuck in the craw of a number of the pedants on IMDb, but it’s also a believable one. Keep the tech at home, kids, it’s the goddamn wilderness.

Their paths cross with a seedy Irishman with bad table manners (even for the backcountry) and that’s where things take a decidedly different turn. 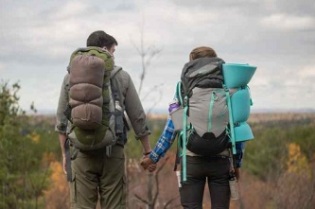 Director Adam MacDonald (Rookie Blue) eases us into the woods pretty effortlessly and paints a solid picture of isolation/loneliness.

There’s constant chatter among us horror folk about what constitutes too much/little character development. With Alex and Jenn, MacDonald has it “just right,” a la Goldilocks and the Three Bears.

And speaking of bears…well, let’s just say that the film’s apex is an apex predator. There’s a scene that’s bold, brash and bloody.

Backcountry rewards patience, as does appreciation of nature at the end of the day.

Give this one a shot.