We find master strokes from Dario Argento, and a nano-thin plot that is an excuse to throw sumptuous visuals* at the viewer.

The opening salvo is 15 minutes of a rain nightmare, a dream deluge that seems lifted straight out of Kafka’s The Castle. It’s one of the great openings (perhaps the greatest) of any horror film. Full stop.

Young ballerina Suzy (Jessica Harper) hails a cab in a storm. The driver doesn’t understand her perfectly capable German pronunciation until she hands over the address, then the back of his head almost disappears into the cascading rain on the dash as the viewer is driven around and around. It’s as disorienting as Suzy is disoriented. (Part of this dreamlike quality can no doubt be attributed to the actors’ dialogue and reactions, as some members of the international cast both could not understand one another, as well as their English lines).

The cabbie eventually drops her off at a very Gothic dance academy in Bavaria. That’s where a figure shrouded in darkness has recently murdered one of her classmates, gutting the victim and then bungee-ing her through the structure’s sun roof. Faculty and staff are reluctant to discuss the matter, and it’s up to Suzy, hero’s journey-style, to get to the bottom of the mystery.

The flick is a dark nightmare, still in a giallo style that Argento favored at the time, and inspired by Edgar Allan Poe, among others. 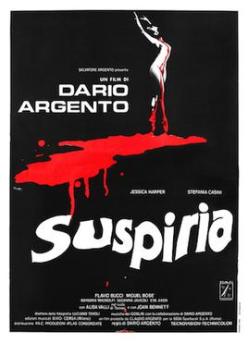 Suspiria is Fellini-esque in its weirdness — the ambling blind musician and his dog; Pavlo, the buck-toothed Romanian servant; the stomach-churning maggots; the doctor who prescribes wine after Suzy’s fainting spell…and they’re all as integral to the finished product as the unsettling visual language.

The first (and best) of Argento’s so-called Three Mothers trilogy (which includes the beguiling Inferno and also The Mother of Tears), Suspiria is as arresting a visual experience as you’ll ever see in horror, but also as memorably an auditory one. The rock band Goblin’s theme is so identifiably creepy you can’t fault Argento for its overuse. There’s a case to be made (and we made it in an episode of the Really Awful Movies Podcast) that it’s one of the Top 5 Horror  Movie Themes of all time.

There are nods to Snow White, as well as The Cabinet of Dr. Caligari, but Suspiria is its own entity, demanding multiple viewings. It’s a wonderful gateway drug to experience the surreal world of Italian horror.

(*Editor’s note: The 2018 remake doesn’t have the same color palette, but with a Thom Yorke score and comparable intensity, it shouldn’t disappoint. But we all know how these remakes usually turn out).