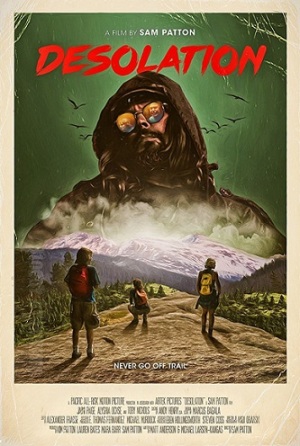 Wilderness horror is the purest form of horror. After all, camping is the time we’re most likely to indulge our appetites for scary stories, typically around a campfire…deep in the dark woods where we’re least likely to be found. And where there’s most likely to be escaped lunatic lurking about.

Desolation fits comfortably in the wilderness horror / survivalist camp, yet is quiet and introspective, words typically not associated with the sub-genre — which usually devolves into internecine squabbling and shouting, especially in the face of, or precipitating, adversity (for those who are interested, step north across the border and check out the highly underrated Canadian horror, Rituals, aka, “Canadian Deliverance,” where a bunch of bickering doctors get picked off Ten Little Indians-style)

In Desolation, friends Jenn and Abby, along with Abby’s pre-teen son Sam, are camping in the picturesque woods of Upstate New York. Abby’s recently lost her husband, Michael, and is coming to terms with the fact that her son is going to grow up without a father. The motivation for the trip is to scatter Michael’s ashes in the Adirondacks.

Along the beach, Sam spots a hooded figure crouching in the reeds, a kind of backwoods Unabomber Dave Grohl (with a bit of Torgo from Manos: The Hands of Fate thrown in, see poster above). Sam waves and the man doesn’t return the gesture.

Later, when Sam’s tucked into bed, Jenn and Abby polish off a bottle of wine and chase it with some weed. In their impaired state, they come across a mysterious backpack leaning up against a tree. 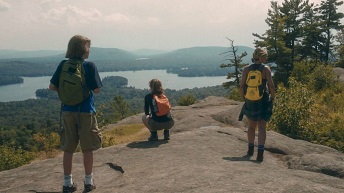 The rest is not exactly Chinatown.

It’s pretty straightforward stuff, with the exception being that it’s not too often a mother and son team up in survivalist mode, the usual domain of menfolk.

Too leisurely and talky for its own good, Desolation is still somehow sorta watchable, especially without the usual assortment of id-driven foul-mouthed coeds we expect to populate these things.