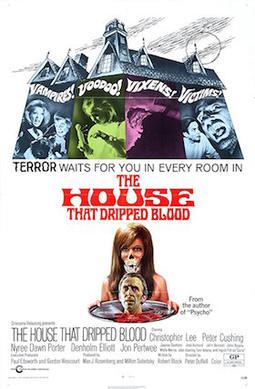 The house is the epicenter of so much in horror, whether it’s the caller calling from inside it, the creaky door slamming in the middle of the night, the body lodged in the wall, or the phantasmagorical figures appearing in the bathtub. That’s why it’s a bit odd that in the anthology horror, The House That Dripped Blood, the role of the abode is so diminished.

But that shouldn’t diminish the impact of this fun little 70s feature, which showcases the combined talents of some horror icons, albeit appearing in different segments: Christopher Lee and Peter Cushing.

The set up for each of the four segments involves prospective renters of a sprawling, dusty Victorian home.

In Method for Hire, a crime writer played by Denholm Elliott rents the place for some peace and quiet (a bit like Ethan Hawke in Sinister). He’s soon plagued by visions of his own fictional creation, a leering strangler named Dominic.

In Waxworks, Peter Cushing portrays a retired stockbroker who becomes completely obsessed with the image of a waxwork figure in a local curiosities museum.

In Sweets to the Sweet, Christopher Lee is a hard-ass dad who won’t let his young daughter associate with her peers or have any toys. He hires a tutor, and soon the daughter is exacting her revenge.

In The Cloak, a two-bit b-movie actor is dissatisfied with a vampire production he’s starring in. Acting as his own wardrobe stylist, he procures a Dracula cape from a rundown curio shop (never a good sign, see Dario Argento’s Inferno). Soon, he’s overcome with vampiric/method acting tendencies.

The Cloak is the cheekiest of the bunch, Sweets to the Sweet the most unpredictable.

They’re each delightful in their own way, as are many/most Amicus productions.

[Check out our podcast discussion of The House that Dripped Blood!]

4 thoughts on “The House That Dripped Blood”