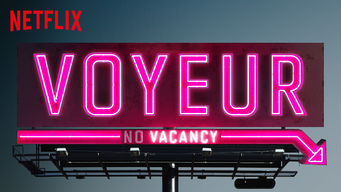 Masters and Johnson through a Howard Johnson? The title “Voyeur” in this unnerving Netflix documentary is Gerald Foos, a former motel owner who spied on guests through vents and fancied himself some kind of sexual anthropologist.

And he’s not alone.

Gay Talese, famous New Yorker scribe, thinks so to and wants to bring the story out from behind the shadows, and past the ice machine and flashing sign.

Foos and the literally flamboyantly Gay form an unlikely twosome of tit-for-tat enabling. This will have the viewer question to what depths one should go for a story, and to what extent they’re complicit in watching this squalor as they wag an accusing finger.

The first third of Voyeur is a kind of “so what”? you’d ask yourself after a night of slumming through a Dateline NBC episode. It’s actually a tough slog with deviant Foos matter-of-factly detailing how he violated the privacy of hundreds of his guests through recollections from yellowing notes he’d taken during his nightly habitual viewing. Lucky for him, the statute of limitations has run out. And for that reason alone, Foos isn’t behind bars and in administrative segregation, and fearing for a shank that would surely forthcoming.

Nope. Foos is free, and largely depicted as a publicity hound and self-justifying egomaniac, which he clearly is.

The next bit of Voyeur is where things get more unsettling. And more compelling: Foos’ relationship with and dedication to his wife, is actually surprisingly touching…

But it turns out Foos isn’t entirely a reliable narrator either (though the key, sordid details are largely right) and as a consequence, the notoriously reliable Talese’s journalism starts to get picked apart by fact-checkers and competing media outlets, even to the point where he refuses to do publicity for the nonfiction work on which all of this is based.

There’s storytelling, and then there’s becoming part of the story. Hunter S Thompson had the good sense to remove himself from hanging with the Hells Angels (of course they had to beat the holy tar out of him for that teachable moment) while Talese seems clearly and unnecessarily friendly with this icky duo. After all, Foos bears the hallmarks associated with the sociopath that he clearly is: lack of remorse and shame, unreliability, poor judgment and failure to learn by experience, and pathological egocentricity to name but a few.