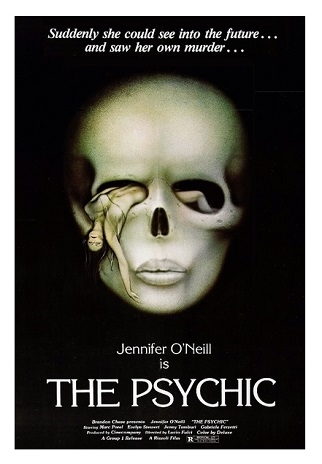 Fulci-lite, is like lite-beer. Still a beer. And as such still enjoyable. The Psychic, aka, Sette note in nero (Seven Notes in Black) has that usual bit of Italian flare, wobbly-pop narrative and other-wordly dreamscapes that make these kinds of flicks enjoyable.

Virginia has psychic visions, stemming from girlhood when she has a harrowing hallucination of her mother plummeting off the white cliffs of Dover. These carry on to present day Florence, where she has a premonition of a body stuffed into a wall, the corpse of an elderly woman. When the “Carabinieri” start poking their noses around, they do find the deceased, however it’s the skeleton of a 25-year old.

The boys in blue implicate Virginia’s husband, Gianni, a Lothario who once dated the woman, but more damningly, it was in his fixer-upper house and behind his drywall, that the victim was stashed.

Dutiful Virginia teams up with Gianni’s sister Gloria, to put together a case to spring Gianni from the joint (this being the Italian justice system, Amanda Knox and all, one can’t be too careful. As Gianni puts it, re: a body found on his premises…”here it takes so little” [assumption of guilt]).

And it’s through her Virginia’s visions that clues unfold…a yellow cab, driven by a guy who ferried the deceased around on that fateful night, accompanied by another Lothario, an arts expert, Professor Rospini. Perhaps it was he did the nasty deed and who wanted to shut up a young paramour and prevent the missus from finding out? He certainly has a more viable motive.

The Psychic features some absolutely incredible music, written in part by genre heavy Fabio Frizzi, with a particularly foreboding piece being the alarm for a watch Gloria gives to Virginia.

With very mild gore, there are still enough Fulci touches to sate the masses. This was two years before the inestimable Zombi 2, and the classics he ripped out in the early 80s like The Beyond and City of the Living Dead.

[CHECK OUT OUR PODCAST DISCUSSION OF THE PSYCHIC!]

1 thought on “The Psychic”