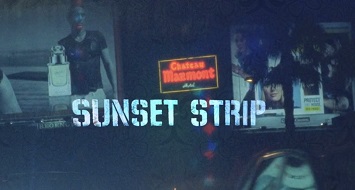 It’s easy to be suspicious of places like Los Angeles or Vegas, where there’s only one season and dreams go to die.

For as many dreams as LA’s Sunset Strip has fulfilled, it’s crushed that many a thousandfold.

As documentary fare, Sunset Strip is an interesting proposition: charting a course leading back to prohibition, through to Sammy Davis Jr, mobster Mickey Cohen, Hugh Hefner, Jim Morrison and the Doors, the Chateau Marmont and infamously, the glam metal scene.

Now though, it’s somewhere people visit because things happened there, not because things happen there. It has this in common with Vegas, where bachelors recreate the Rat Pack, minus the insouciance. It’s forced and indecorous. And there’s no better examples of this on the Strip these days than the discount metal act, Steel Panther. They’re the hard rock equivalent of a guy dressed like Lincoln telling you about the Gettysburg Address, when you should’ve been there to see Dokken in the year four score and 7.

Sunset Strip does a great job telling you where the stretch has been, but not where it’s going. Of course, it’s possible this is nowhere. Especially the face time given to Steel Panther.

The death of Lemmy, a Sunset Strip Rainbow Room fixture, has created a bar stool vacancy for another aging rocker to collect his mail. He’s dead and rock and roll is dead too, far removed from a place of prominence in the popular culture.

Like the passing of time, there’s something sad about nostalgia. And really that’s all that’s offered here.

What makes the Strip special NOW? Where does what used to happen there, happen NOW? Is it destined to be an open air museum like Beale St. in Memphis, haunted by the ghosts of WC Handy and BB King?

The doc really comes alive when we hear about the Hyatt Hotel (or as Ozzy Osbourne calls it, “The Riot,”) where motorcycles were driven down hallways and Led Zeppelin handcuffed groupies to bed posts for days on end. Or when we hear Keanu Reeves speaking wistfully about his time at Chateau Marmont.

The rest is populated by grizzly hustlers, scenesters and old-timers including Mickey Rourke and a greaser buddy who looks like he’s going out to front a rockabilly act. And even carries his own comb.

Nostalgia is ok for a little while, then it’s time to rejoin the here and now. As Lao Tzu said: