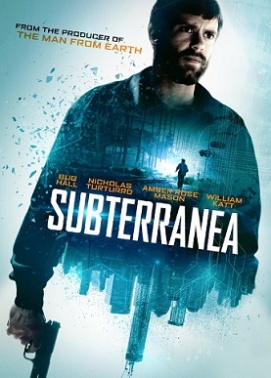 Mistaking appearance for reality is the premise behind Plato’s Allegory of the Cave, where prisoners shrouded in darkness, perceive nightly flickering shadowy puppetry on a wall as the real world. In Subterranea, a Man with No Name is raised from boyhood to an adult in pitch black, his only contact to the outside through a mail slot.

It’s through this portal that he is given an education of sorts (if not exposure to vitamin D) by a mysterious figure known only as The Provider, who…um…”provides” the youngster with sustenance and materials read aloud.

Decades hence, The Captive (played by Bug Hall) is then released into the big, lit, color cacophony that is the world – alone, confused and with nowhere to turn. He emerges, cowering and fearful, as a subway train rattles past. It’s a pretty compelling introduction, not dissimilar to the jarring opener to the Pascal Laugier masterpiece, Martyrs.

Once free, a small time hood, the base, homeless Remy (Nicholas Turturro) tutors The Captive in the ways of his dog-eat-dog code of ethics, taking a shine to this “Rip Van Winkle” who understandably has only a limited understanding of social convention. The innocent is conscripted as  Remy’s accomplice, stealing charity donation funds from coffee shops, grifting, living out on the streets and then graduating to more dangerous crimes.

That’s when a woman Maya (Amber Mason), a material witness to a felony, takes an interest in The Captive and intervenes and the twosome try to fill in his backstory while the police sniff around.

Turns out there are others out in the world like The Captive, all of whom are trying to find out what happened to them and how their lives ended up as they did. One could consider Subterranea an extended metaphor of abuse in the Catholic Church, and the film spins a wholly intriguing unconventional narrative before slumping a little bit toward the back-end.

Still, a valiant effort. See for yourself.