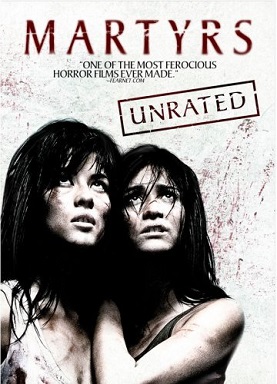 [For an in-depth discussion, please check out our MARTYRS PODCAST]

It’s inevitable that the impact of a horror, much like a comedy, diminishes with repeat viewings. The fact that Martyrs does so at a rate far less than the average horror is a testament to its raw power. It’d take 3-4 viewings at least for its impact to wane…but who’d want to absorb that kind of punishment?

Such is the effect of Martyrs, one of the few films so unrelenting it’s difficult to re-watch.

Silly prologues have been a staple of the horror genre for generations. These typically place a protagonist in harm’s way as a child in order to set up a face-to-face with their antagonist years later as adults. Or it’s a means of explaining away via nature, not nurture, how an antagonist’s psychopathic tendencies came about.

Rarely are they charged like a radioactive ion, as in Martyrs’ electrifying setup. We have a brutalized young girl, Lucie, screaming and running for her life from a decrepit industrial hellscape, and a subsequent police investigation therein. Then, a heart-wrenching examination of the traumatized girl’s group home upbringing through the recollections of friend Anna and choppy Super 8 footage.

A decade and a half into the future,  we bear witness to an idyllic family setting, introduced ingeniously by an ambiguity seldom seen in horror. Then, the mundane goings-on are interrupted by one of the more shocking massacres in cinema history. 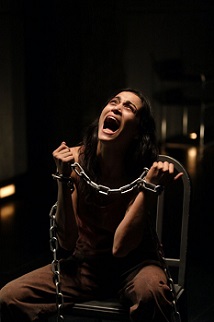 It’d be a disservice to divulge any more than that.

It suffices to say that Lucie and Anna’s connection to the deceased family is explored in a psychological maelstrom of PTSD and jarred imagination figments. This takes the form of a contorted, hissing, emaciated female who carves up Lucie’s mind and body. This creature trope is common to supernatural horrors such as The Ring or 13 Ghosts, but no punches are pulled here as far as violence is concerned. In fact, the corner has thrown in the towel.

As unsettling as those scenes are, it’s in Anna’s investigation into what really happened to her broken friend where Martyrs leaves viewers truly gasping for breath.

She eventually discovers an underground lab, run by the same evildoers forced to abandon their industrial locale years ago, who’ve continued their Mengele experiments, methods as methodical, systematic and cold as anything ever committed to film.

Martyrs offers no letup. No pause. No resolution. No hope.