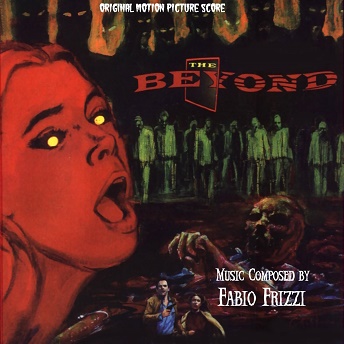 High empathy individuals (who comprise the bulk of horror film audiences, or so we’d like to think) are more likely to feel emotional responses to music. And there are cross-cultural similarities as to what arouses a fear response, whether it’s key or loudness.

According to Current Emotion Research in Music Psychology, a paper by a pair of University of Toronto researchers, by age 11 children can identify music-related emotions as adeptly as adults. And there are physiological responses as well, measured in facial muscle activity or skin conductivity, in response to classic horror motifs, such as harsh timbres or diminished 7th chords. Horror movie themes make frequent use of so-called non-linear sounds as well, to ratchet up the tension, including whispers, screams, examples of which you’ll find below in our list of the Top 10 Horror Movie Themes.

Perhaps the best summer camp horror movie of all time, cheesy Yes keyboardist Rick Wakeman breaks out an electric piano for a Fulci-esque score to The Burning which goes full-Bach at 2:35 before returning to ethereal outer space at 3:30. Ironically, it’s the frequent spaces without music that makes The Burning so scary, where the campground forest (and its whispering leaves) become an integral character unto itself. Still, Wakeman brings the goods to one of the underrated horror slashers of all time.

Psycho’s theme, like the shower where Marion Crane met her maker, is practically inescapable. The most famous, parodied, imitated and talked about scene in movie history, the Psycho shower scene was intended to be rendered in silence. Good thing composer Bernard Herrmann ignored Hitch’s directive. The “eek-eek-eek” of the violins provides the perfect accompaniment to the frenetic stabbing.

9. CHILDREN OF THE CORN

It’s a genre we dubbed “Pennsylvania Dutchsploitation” in our book, DEATH BY UMBRELLA! The 100 Weirdest Horror Movie Weapons. In Children of the Corn, a med school grad and his girlfriend, run afoul of a group of sociopathic Amish-looking kids in a seemingly abandoned Nebraska town.

When you have a creepy children movie, best to have a dissonant children’s choir accompaniment. That’s what writer Jonathan Elias gave us here. Elias is an admirer of Béla Bartók and Igor Stravinsky, both of whom featured prominently in our list of scary classical music pieces for The Shining and Alfred Hitchcock Presents respectively.

[And please check out our Children of the Corn podcast]

A soaring operatic soprano melts over the listener, hitting a powerful high C at 1:22. This stone-cold Argento classic (the guy who also brought us the exemplary Opera) then offers up a simple piano motif and then what sounds like a harpsichord and rocking guitar.  This one’s courtesy of Claudio Simonetti and Fabio Pignatelli and is as prog-rock as a horror soundtrack can get. Things get downright funky at the 2:50 mark, with driving drums.

Drumroll please…A nifty drumroll segues into that unmistakable E minor dirge that everyone’s come to associate with the towering presence of The Tall Man. Phantasm gives us those infamous spare notes and a few evocative symbol crashes for the demonic ride. Malcolm Seagrave and co-composer Fred Myrow (Soylent Green) met at USC in 1957, and began a lengthy collaboration that includes this for the low budget iconic hit of 1979.

One of the best “daylight” horror movies (along with The Texas Chainsaw Massacre) is Argento’s Tenebre. Here, a distorted keyboard sounds like it’s saying “follow it up…” Dario Argento supposedly put in a call to the members of Goblin, who at that point had gone their separate ways, urging them to reunite for this movie. And the horror family is lucky they did.

A bunch of awww’s and then some sliding bass…then dissonant piano overlaid with a pretty flute, before crushing drums kick your behind. The Beyond soundtrack is the perfect accompaniment to accommodations nobody wants, the Bates Motel of Italian cinema known as the Seven Doors Hotel.  That’s the Louisiana locale where artist Schweick was lynched, but not before opening A PORTAL TO HELL!

Two themes so ubiquitous, we decided not to include them here but link to them instead.

John Williams’ Jaws theme (above) is relentless, pounding and repetitive. It’s the perfect musical accompaniment for the mechanical attacks of “Bruce” the shark, and for sharks generally, dead-eyed killing machines.

Penned by John Carpenter with a simple keyboard riff in a complex time signature, (much like the theme from Mission Impossible), you won’t be able to dance to this. 5/4 time signatures are a bit odd. The prog rock band Rush renders their concert hit “Y-Y-Z” in Morse Code, YYZ being the airport code for Pearson International in Toronto. And also, try dancing to Soundgarden’s My Wave, where the beat always seems to be ahead of itself.

Best known for Fistful of Dollars and of course, The Good, the Bad, and the Ugly, Ennio Morricone makes hearts race here with a sinister bass riff, bleak and unsettling. The five-time Oscar nominee was called into action, when John Carpenter was too under the gun to get his first studio film done on time.

Like a nursery from hell, Suspiria launches with some dissonant bell chimes before some Satanic whispers and reverb drums. At 2:20 we’re taken into deep space with galloping drums. Director Dario Argento said, “I need the audience to feel that the witches are still there, even if they’re not actually on the screen.” And “witch” is whispered throughout here, adding an extra layer of creepiness.

Christopher Lombardo and Jeff Kirschner are authors of DEATH BY UMBRELLA! The 100 Weirdest Horror Movie Weapons.