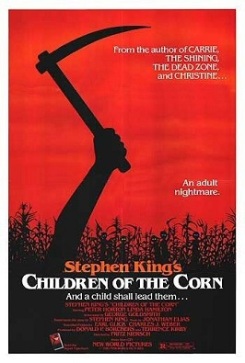 [CHECK OUT OUR CHILDREN OF THE CORN PODCAST]

In Children of the Corn, we see a bunch of diner patrons meet their maker, not from under-cooked beef or listeria, but at the hands of hick kids who run roughshod over them with sickles and assorted farm implements.

Flash forward and who do we meet? A couple, Vicky (Linda Hamilton) and boyfriend Burt (Peter Horton), introduced to us through the undeniably catchy Gary U.S. Bonds novelty hit School is Out, crisscrossing the United Sates so he can pursue opportunities in the medical profession.

The circuitous route to the Pacific Northwest takes them through pastoral Nebraska where the radio blasts nothing but end-times hectoring. When a kid sprints out onto the highway, they can’t take evasive action quickly enough (it’s like that lawyer joke whose punchline is, “there are skid marks in front of the skunk.”)

But it’s not the couple that sent the farm kid to Cornhusker heaven -he was heading there anyway, as Burt discovers his neck had been cut before he’d stumbled onto the road.

Not knowing how to proceed, they put the body in the trunk to hearse it to the nearest town, an honest move but maybe not the best one considering nobody in their destination of Seattle would be on the look-out for a sedan with Amish front-end damage.

However, nobody in horror films get out of Dodge (or anywhere else) quickly enough. Vicky and Burt, try as they might, pre-GPS, can’t seem to find the elusive nearby town of Gatlin and numerous road signs prove useless. 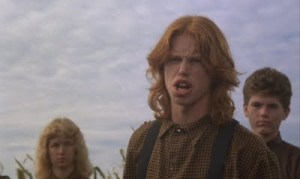 Eventually, the couple does find the abandoned town and a sprawling abandoned home, save for two little kids who inhabit it, one of whom draws creepy renderings of what can only be described as “primitive folk art.”

That’s where Children of the Corn introduces viewers to the infamous hayseed farm kids, who sport wide-brim hats and spout eschatology. There’s much talk about the mysterious “he who walks behind rows.”

This production is another Stephen King adaptation not up to the author’s standards, but he seems to have softened his stance on the film of late, saying he “actually like[s] the original pretty well. I thought they did a pretty good job on that.”

Children of the Corn features some nice atmospheric touches and a terrific score, which we included in our list of the Top 10 Horror Movie Themes.

The preacher kids make great antagonists too, even if the end result can’t help but be a bit corny.