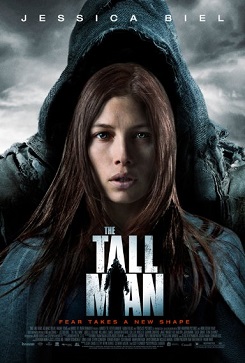 Call it Pascal’s wager. Would the goodwill French director Pascal Laugie built up with his stupendous achievement Martyrs propel the follow up, The Tall Man?

It’s nearly impossible not to think about Martyrs while watching this one, nearly as much as it is to banish thoughts of the first two Godfathers in the endurance test that is Part III.

However The Tall Man couldn’t be more different than Martyrs, despite a few similar directorial flourishes.

In The Tall Man, a backwoods Washington town (the evocatively spare and lovely Mission, BC) is beaten down by the closing of a mine. Everyone’s seemingly out of work, down on their luck, eking out an existence.

Community nurse Julia Denning (the outstanding Jessica Biel) is upholding the legacy of her deceased doc hubby, one of the few consistencies keeping the misbegotten place from becoming unglued.

This, as children are mysteriously disappearing from their homes, snatched up by the cloaked figure, the chimerical Tall Man. Julia’s own son, cherubic David, is carried off into the night and shoved into the backseat of a delivery van.

Townsfolk become despondent and gather around the small town’s de facto community center, the local diner, to gossip about who/what is responsible as law enforcement closes in on suspects.

If this sounds like some kind of prosaic procedural a la Criminal Minds, it isn’t. There’s a whole lot going on that cannot be divulged.

Told in flashback, the narrative structure keeps the audience on its toes (to say the least) and the mise en scène plays out like a Nightmare on Elm Street film, minus Freddy. There is a perpetual lighting/rain storm that adds a neat undercurrent of dread.

Ambiguity and surprises abound and the haggard Stephen McHattie (A History of Violence) delights as Lieutenant Dodd, matching Biel step for step. The rest of the cast is dynamite as well.

Other reviewers have pointed out that this was a hard sell, as its supernatural aesthetic, as far as title and promotional materials are concerned, belie The Tall Man’s mystical whodunit roots. And that’s a shame. Expect the unexpected, even if it doesn’t quite gel together cohesively.