Don’t let the nasal hardware or the unkempt flowing locks fool you. This man is a corrupt FBI agent, and he means business.

Forget Hans Gruber in Die Hard. Who needs that angry Teuton when you’ve got the bastard offspring of Triple H and vampire Lestat? Savak is a corrupt FBI man in the Brian Bosworth gonzo action pic, One Tough Bastard, AKA, One Man’s Justice (is another man’s treasure?)

Well, this trash is treasure. With the lowest expectations comes the greatest rewards.

His wife and daughter are murdered in a stick up hostage situation, and the film goes on to gloriously fail the Bechdel Test unless you count the kid screaming for her mommy. North arrives on the scene, but is pumped full of lead as he tries to save his loved ones.

Like Seagal, (or the similarly pumped full of lead 50 Cent) North is Hard to Kill and as soon as he recuperates he’s off to kick butt and take goddamn names.

His memories of the twin fatal shootings slowly start flooding back to him, particularly a greasy gunman with a bat tattoo on his neck who resembles Willem Dafoe’s meth-addled son.

North, in a great montage showing just how dangerous and scary tattoo parlors are, visits each and every one in Venice Beach while sporting a brown blazer with elbow patches. He eventually tracks down the artist who did the batty, and from an aesthetic standpoint questionable, artwork. When the man gives him attitude and threatens North with a beat-down for asking to divulge those particulars, the tools of his trade are rammed through his hand and the parlor goons get a fantastic ass-whoopin’. With the tattoo needle still quivering through his tendons, the tattoo artist begrudgingly offers details about how North can pursue his quest. 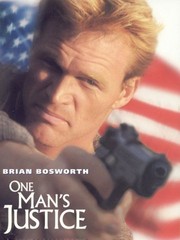 Boz is in fine form here: his spinning back heels are awesome, his elbows are sharp as diamonds and he throws bad guys through glass with aplomb.

Among the bad folks involved is a black heroin-dealing gang headed by forgettable floppy-pant rapper Hammer! Can’t touch him. He’s Kane, a badass with a pocket square folded into a crown.

The true star of One Tough Bastard though, is the corrupt FBI man, the aforementioned Savak. He’s the brains behind high-tech military ordinances (hilariously marked “military ordinances” on the crate) theft  from North’s base to be used on the mean streets of Los Angeles.

His nose-ring and propensity to style his hair like Robin Zander from Cheap Trick, set him apart from other action hero villains. And none of these villains would be worth their salt without a boatload of earth-shaking catchphrases.

Savak’s are terse yet lyrical and invariably involve “pony.” (“You’re gonna be in the dog and pony show until the pony dies!” and “You tryin’ to f*ck me again, Pony?”)

His greatest offering though, is in between puffs of an ever-present smoke, “you packin’ heat? No? Then what good are you?” Words to live by in off-the-charts high body count action movies.

One Tough Bastard packs a lot of heat and is a terrific, underrated heroin dealer revenge flick.