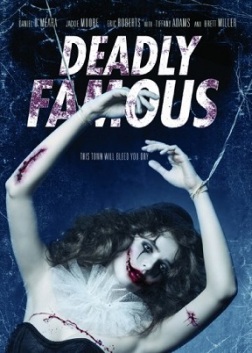 “Once more unto the breach, dear friends, once more…”

As an aspiring actor, it’s all about trying, trying and trying again, whether auditioning for a deodorant commercial or Henry V.

Deadly Famous is billed as “Entourage meets American Psycho” (Hey, if you’re going to do a movie about the movie-making process, you need an elevator pitch.) This one’s a bit misleading though. Whereas Entourage is an ensemble piece of young guys breaking into Hollywood, Deadly Famous is a character study, if you will, of a middle aged acting coach and once successful child actor gone psycho.

Alan Miller (Daniel O’Meara) is long past his salad days as a young 70s TV star. Now he’s a loner Pacino teaching starlets method acting in a secluded mansion in the Hollywood Hills while shooting the breeze with drinking / blow buddy Eric Roberts (who plays…Eric Roberts and regales him with stories about partying with David Carradine in Bangkok, in between doing lines — both of the script read-through and coke variety).

Pamela (Jackie Moore) is a Busy Philipps blonde by way of Shannon Tweed, determined to get a big break, who forms an unlikely kinship with her overwrought affected teacher Alan, complete with a sweater tied around his neck. As a (barely) working actor though, he proves the adage “those that can’t do, teach,” his prima donna audition tantrums making another adage, “you’ll never work in this town again” nearly a fait accompli.

Alan obsessively shoots every script read and selfie soliloquy in his living room. Alan’s always on, as is his camera. Deadly Famous really earns its found footage-style conceit. This seems like what an acting coach would do and the film is the better for it. 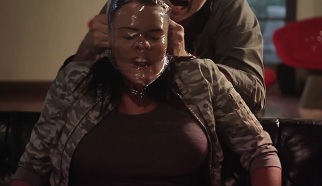 He also cajoles perfect strangers into the line-reading process, including a poor public servant census taker unfortunate enough to darken his door. It’s a great scene, underscoring the narcissism of a once somebody reduced to being just another nobody slotted into a category: Caucasian, Male, 40-50.

He picks up transvestite prostitutes in West Hollywood to do line readings as well, the would-be Brando beating them to get their best “performance.” This as he lures aspiring actresses via Craigslist to chat about movies he’s “producing.”

Deadly Famous nails the Hollywood scene: the endless supply of ditzy yoga-practicing, animals-first bobbleheads who descend on the City of Angels annually to see their name in lights. It also nails the pompous aging actor, too full of himself to notice that career-wise, his rear-view mirror has a rear-view mirror. And we’re not talking Eric Roberts. He’s a lot of fun and adds legitimacy to the Alan character (a former child star would have to have at least one Hollywood friend, even if Roberts at this point is off, off, off, Hollywood).

The opening title sequence is really cool, the performances are top-drawer and the first murder is a horrific stunner.

Weirdly, as sadistic as Alan is, the odd couple friendship between he and Pamela is compelling and you wish biz success on both of them.

If you’re interested in another horror film which shines the floodlights on the audition process, check out the Canadian classic Curtains.