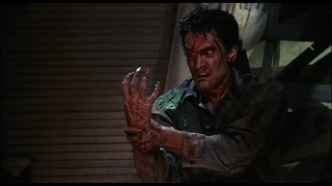 In his seminal 1949 work The Hero with a Thousand Faces, American mythologist Joseph Campbell introduced the concept of the monomyth, otherwise known as “The Hero’s Journey.”

In doing so, Campbell defined the archetypical hero and posited that all heroic stories are based on the same mythological themes. According to Campbell, “A hero ventures forth from the world of common day into a region of supernatural wonder: fabulous forces are there encountered and a decisive victory is won: the hero comes back from this mysterious adventure with the power to bestow boons on his fellow man.”

In horror, we have a tendency to focus on the villain rather than the hero: the antagonist whom the hero must face in order to achieve his or her decisive victory. And yet horror films have featured many heroes who have encountered “fabulous forces” and “supernatural wonder” and have come back transformed from their “mysterious adventures.”

What follows is a list of the 10 Greatest Horror Heroes. In order to be included, a hero has to survive the ordeal (at least long enough to see the sequel). Thus, perhaps the greatest horror hero of all, Duane Jones’ Ben from Night of the Living Dead must be excluded because of that film’s shocking and tragic dénouement. Furthermore, “final girls” are excluded since a hero has to be proactive rather than reactive. The 10 that follow are characters that consciously escaped their “common day” and went in with metaphorical (and sometimes literal) guns blazing to kick evil’s ass and lived to tell the tale.

Dr Loomis is perhaps the unlikeliest of heroes. A short, stocky child psychologist pushing retirement age who had the misfortune of being assigned to treat a 6-year-old boy who murdered his older sister one Halloween night – a boy who in Loomis’s estimation embodied pure, unadulterated evil.

When grown up, Michael Myers escapes Smith’s Grove Sanitarium to return to Haddonfield, Illinois, the place where he committed his initial crime. Dr. Loomis, played wonderfully and indelibly by Donald Pleasance, trails his charge and attempts to warn the authorities and residents of Haddonfield that “death has come to your little town….” However, Dr. Loomis is more than just a balding version of Chicken Little. In addition to raising alarm, Loomis relentlessly and doggedly pursues the sororicidal slasher, ultimately shooting Myers and saving the life of the killer’s ultimate prey, his eventually-revealed younger sister Laurie Strode. 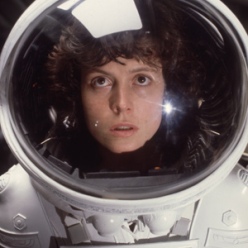 Essentially a cosmic slasher film, the opening chapter of the long-running futuristic space saga introduced the world to Sigourney Weaver’s formidable Ellen Ripley, the Warrant Officer of the Nostromo.

Answering a possible distress signal, some of the crew investigate a downed and derelict spacecraft and return with a very unwelcome stowaway. When the Alien emerges in the films iconic “chestburster” scene, it quickly matures and stalks and dispatches most of the crew. But not Ripley. She springs into action, accessing the ship’s computer system MOTHER, finding out that one among them is not whom he seems, and ultimately manages to blast the Alien into outer space. In doing so, she prevents the homicidal extraterrestrial from making its way to Earth and saves herself and her pet cat Jones. 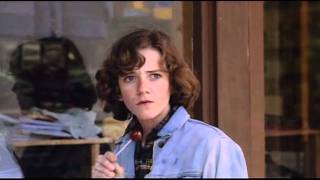 It’s hard being pre-pubescent. You’re at that awkward stage where you’re too old to be believed or succored when you tell ghost stories, but too young to do many of the things needed to do if said story turns out to be true. That’s the dilemma young Mike, played by A. Michael Baldwin, finds himself in in Don Coscarelli’s Phantasm.

To add to his woes, Mike’s parents perished in an automobile accident and he’s being raised by his older brother Joey, who unfortunately seems to take more of an interest in playing guitar with his ice-cream vendor best bud Reggie than in his younger sibling.

So when Mike witnesses the nefarious Tall Man (the late Angus Scrimm), the town’s local mortician, single-handedly hoisting the casket of Reggie and Jody’s late friend Tommy into a hearse, his suspicions are confirmed that the mortician is not only up to no good, but is probably responsible for that death as well. Now he just has to convince others to believe him while pursuing The Tall Man  and putting himself in potential mortal peril in order to retrieve evidence which will convince Jody and Reggie that, yes, the Tall Man is indeed real. 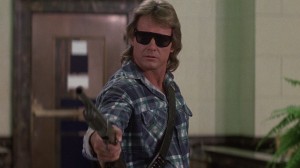 In a nod to Sergio Leone, the late “Rowdy” Roddy Piper is a man with no name in John Carpenter’s late-80s masterpiece They Live (although he is listed in the credits as Nada: Spanish for nothing). Piper plays your true everyman, a migrant worker who stumbles into the conspiracy to end all conspiracies and then has to (paraphrasing here) kick ass and chew bubblegum while suffering from a dearth of bubblegum.

Upon donning a pair of sunglasses which reveal the world as it truly is – populated by grey-skinned, bulbous-eyed aliens who endeavor to keep society under control by propagating messages such as “Obey” and “No Independent Thought”- Nada must take decisive action, including recruiting his friend Frank to the cause by besting him in the one of the greatest fights in the history of cinema. 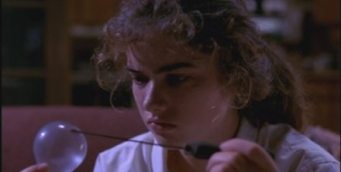 Nancy Thompson is no final girl. She is the protagonist, the hero, the one who takes it to the dream-invading, child-molesting, pepperoni-pizza faced antagonist Fred Krueger in Wes Craven’s seminal slasher A Nightmare on Elm Street. In fact, in a neat subversion of audience expectations, Nancy’s alpha-male, football playing boyfriend Glen (Johnny Depp as one of the slightest high-school footballers you’ll ever see) is neutered and helpless against the fedora-wearing menace. It truly befalls upon Nancy (Heather Langenkamp) to save the day.

Also of little assistance are Nancy’s estranged parents – her police lieutenant father and her alcoholic mother. It’s no accident that before Nancy faces her final battle with Fred, Craven shows her tucking her mother into bed, passed out in an alcoholic stupor. Nancy booby-traps her house and enters into the dreamworld to confront the killer (whom ironically was created by the very same parents of the children of Elm Street who now are completely ineffectual in protecting their offspring) and bring him into the real world where is vulnerable and powerless. 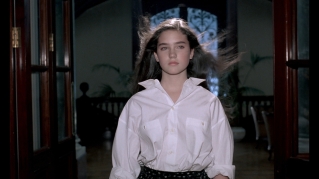 Gotta give a little love to the Italians in this list. Phenomena by Dario Argento is the beautiful (as all early Argento films are) tale of a girl, played by a very young Jennifer Connelly, sent by her movie-star father to study in Switzerland at the Richard Wagner Academy of Girls. Jennifer is no ordinary student, however. She is prone to bouts of sleepwalking and has the ability to telepathically commune with insects.

When students from the academy are found murdered, Jennifer teams up with local entomologist John McGregor (and his helper monkey Inga) to uncover the culprit. What makes Jennifer heroic is her absolute agency and resilience in the face of every obstacle. She’s mocked by her fellow students, and the authority figures at her school attempt to stymie her, but she remains headstrong and defiant. Even when McGregor (Donald Pleasance) is killed by the black-gloved culprit and she’s well and truly alone; even when she’s swimming in a pool infested with maggots and corpses; Jennifer never, ever appears helpless. This is one girl who can take care of herself and will do whatever it takes to ensure that she’s still standing. [check out our Phenomena podcast!] 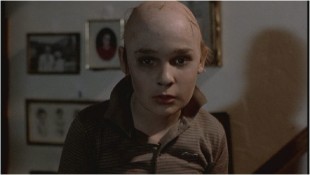 Notice how many horror heroes are children or adolescents? Therein, I feel, lies the reason for the genre’s enduring appeal. By utilizing youngsters as the protagonist, filmmakers give the audience (which typically first experience horror films at the same age as the characters they’re viewing up on the screen) someone to not just root for, but also to relate to. And the archetypical child hero just may be Friday the 13th’s Tommy Jarvis.

Most kids are afraid of monsters, but not Tommy Jarvis. As played by Cory Feldman, Tommy has a room full of monster paraphernalia and delights in donning masks to scare his sister. When the ultimate monster, Jason Voorhees, threatens Tommy and his sister, the kid takes decisive action. He shaves his head to resemble a young Jason and confronts the unstoppable killer head on. As he hacks at Jason repeatedly with the killer’s own machete while yelling “Die!”, young Tommy courageously accomplished what no one in the series had thus far been able to do – decisively end the menace of the Crystal Lake killer for good this time. (At least it was supposed to be for good. Sequels are lucrative after all.) 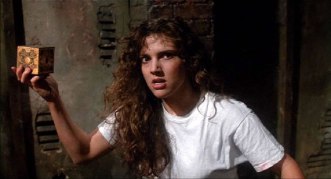 For a genre that’s so often accused of misogyny, it’s interesting to note how many proactive horror heroes are female. Kirsty (Ashley Laurence) in Hellraiser is remarkable. Like others here, she’s resourceful and has dogged determination to vanquish the evil she encounters. Furthermore, Kirsty rises up as a hero when no one else around her can or will.

Kirsty’s family consists of her milquetoast father Larry, her ice-queen stepmom Julia, and her despicable and lascivious uncle Frank (the real villain of the first Hellraiser.) Frank had previously messed where he shouldn’t and summoned forth the otherworldy sadists known as the Cenobites. Hiding in the Cotton family attic, Frank demands bodies in order to be made whole again – bodies which Julia is happy to provide. Discovering this, Kirsty has to face both Frank and the Cenobites, who are determined to take her back to their dimension. (She had accidentally summoned them prior when escaping Frank and absconding with the Lament Configuration puzzle box.) Kirsty bravely and single-handedly confronts the sinister order and banishes them back to whence they came. 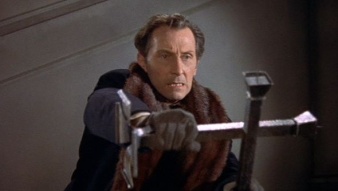 For as long as there’s a Count Dracula, there will always be a Van Helsing – an unwavering nemesis determined to send the Dark Prince back to Hell. (In fact, it can be argued that the hero that began this list, Dr. Sam Loomis, is a modern-day Van Helsing analogue.) Van Helsing is a vampire hunter who appeared in Bram Stoker’s original source novel, and many actors have brought the character to the screen. But none is more badass than the best Van Helsing of them all – Peter Cushing opposite Christopher Lee’s count in Hammer Film’s Horror of Dracula.

Cushing played Van Helsing (or a descendant thereof) five times for Hammer, and three of those outings were opposite Christopher Lee. But it’s the duo’s first go-round together where Cushing is most impressive. He plays Van Helsing like an action hero, and his final confrontation where he chases Dracula throughout the castle, dodges a hurled candlestick, pushes off an attempted strangulation and then leaps across two tables and onto a curtain to expose the Count to sunlight is as exhilarating a final battle as you’re likely to see. 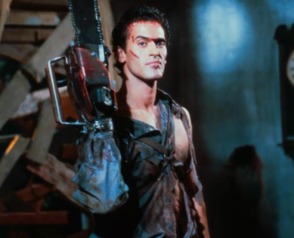 Hail to the king, Baby! Was there really any doubt who would top this list? The Boomstick bearing, chainsaw-handed, wisecracking rapscallion who continually finds himself in a whole heap of trouble and knee deep in Deadites but somehow always manages to get the upper hand on those ugly sons of bitches.

The character of Ash evolved tremendously between the first and the second Evil Dead, and it is in Evil Dead II where he coalesces into the kickass hero whom we all know and love (really, in the first Evil Dead, Ash is a bit of a pansy.) Who you gonna call when Deadites come a-knocking? It certainly ain’t the Ghostbusters. Ash is the man amongst men who is gonna send those bastards back to Hell, and he’ll do it with style and a grab-bag full of one-liners. And at the end of the day, good guy, bad guy, it don’t matter…he’s the man with the gun! Come get some!