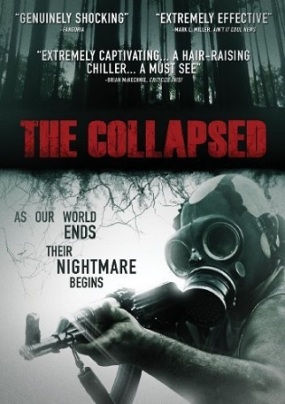 Paradoxically, it’s easy for us to take a jaundiced view of cover kudos. While we’re grateful when they’re ours, all too often a surfeit of pull quotes invariably leads to viewer disappointment. For The Collapsed, however, the approbation is on-point.

While survivalist flicks are a dime a dozen, For $40,000 Justin McConnell and company have done something first-rate with nary pocket change to spare.

Like other survival flicks, there’s people on the run. In this case a family: a vain, sullen teen daughter who thinks nothing of reconciling her survival instincts with a need to shave her legs; a brooding son who can’t seem to please his pa, the armed alpha patriarch; and lastly, there’s the very practical mom.

Like their post-apocalyptic brethren, they’re trying to make it to a Promised Land, in this case one Dover’s Bend where it’s rumored they’ll all be safe. But it’s miles away, naturally.

The foursome take refuge in Lower Bay subway station (the evocative, unused except for movie shoots, Toronto transit facility) and eventually hightail it out of the city to the countryside. They raid a general store for supplies but soon flee, as it’s being guarded by a gas-mask-wearing assailant (pictured in the film’s poster) and an armed associate.

What’s chasing them through the forest are both armed assailantsas well as a heavily-breathing presence – an “it.”

And exactly what is chasing them? And for what purpose? Patience will be rewarded, especially toward the end, but this review is spoiler-free.

But expect the unexpected. The cover art is misleading, to say the least.

The Collapsed is not a contagion flick, with survivors holed up in a re-purposed property under siege from infected vector cannibals transmitting pathogens. Their world ends, as the poster alludes to, not with bangs but with whimpers.

Pasha Patriki’s camerawork is frenzied and paranoia inducing, with focus in, focus outs, and Rob Kleiner’s score is a character unto itself, ratcheting up the tension. There are dream sequences that are particularly jarring and sinister.

While John Fantasia is dynamite as the blue collar everyman dad, some of the performances suffer a tad due to budget/time constraints of the shoot. Hey, this cost $40 grand. Take it with a shaker of salt. Still, time well spent.

1 thought on “The Collapsed”