Don’t Go in the Woods is one of those admonition films, (like Don’t Answer the Phone and Don’t Go in the House) but of course, folks who inhabit horror films don’t usually heed advice, even if it’s in the movie’s title.

The same can be said of these explorers in The Forest — we wouldn’t venture into these deep dark woods unless accompanied by an elite battle-hardened fighting force. And even then.

What lurks under the dense canopy of Japan’s Aokigahara Forest is great horror fodder: a real life “suicide forest,” abutting Mount Fuji (figures no longer publicized to discourage copycats). The green expanse translates into “Sea of Trees,” and according to police records, in the last available year of data (2010), there were 247 suicide attempts there. Sion Sono’s excellent Suicide Club explores that very theme, about which comic Bill Maher darkly quipped, it’s a case of, “you can’t fire me, I quit.” All kidding aside, Japan’s suicide rate is the highest in the developed world. Must be the stifling, deferential culture. After all, it was Japan that gave us this proverb: The nail that sticks out gets hammered down.

In The Forest, Sara (Game of Throne’s Natalie Dormer) is looking for her twin Jess, a free spirit English teacher who’s gone missing in those very woods. En route to find her, she meets up with an American expat in a bar, Aiden (Taylor Kinney) a fluent Japanese speaker and freelance writer, who gains her trust and puts her front and center in his next feature. Aiden then procures a handler to help them navigate the dense forest. The guide warns that they not venture forth, but venture they do…Don’t Go in the Woods, right?

There’s another caveat: things in the bush are not what they seem, a plot convenience allowing for wave upon wave of imagined jump scares in this tree sea. Some are real (they come upon a man who’s hanged himself — an unfortunately common real-life practice there) and some are not (the cliched chimerical school girl).

Bad movies announce themselves within minutes. The problem with The Forest is that it’s beautifully shot and wonderfully paced, setting the table for a horror feast, but the entrees are underwhelming.

It’s a classic “would’a could’a should’a” flick: If they would’ve made a few alterations, it could’ve been and should’ve been great.

The notion of a real-life suicide forest is bone-chilling, but the premise is wasted. When working within the confines of PG-13, ghostly figures abound but there’s seldom a body count. And there’s only so much an audience can invest in the protagonists when there isn’t an immediate physical threat beyond what’s only seen in the mind’s eye. 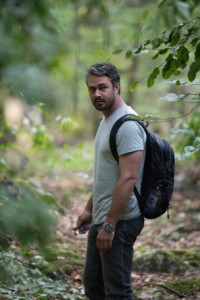 This reviewer speculated, “What if Sara was luring the guy to his forest death, WITH her twin sister as an accomplice?” There are any number of permutations that might’ve worked better, but again, this is mass market, supernatural fare. A strong dose of gritty realism as payoff would’ve gone a long way.

Leisurely unfolding like a travelogue before hitting its stride (not since Lost in Translation has Japan looked this bleak), the film has some good performances, effective jump scares and a couple of laughs as well. However, there are those nagging questions: the “Why doesn’t the search party use dogs?”; “Why spend the night in the woods when you aren’t dressed for it?”; “Why skulk about when visibility is limited?” sort of stuff.

We can’t definitively admonish viewers to Don’t Go See The Forest but unfortunately the tree is merely a sapling when it could have been a giant sequoia.

[Editor’s note: The Forest has been scrutinized in some circles over alleged “cultural appropriation” — a concept as slippery as unagi — and for featuring a white Westerner having the temerity to visit another country where a sibling’s gone missing. What’s really missing though, is logic. A death forest is what’s needed for much of the hare-brained notions that pass for critical theory these days.]

3 thoughts on “The Forest”