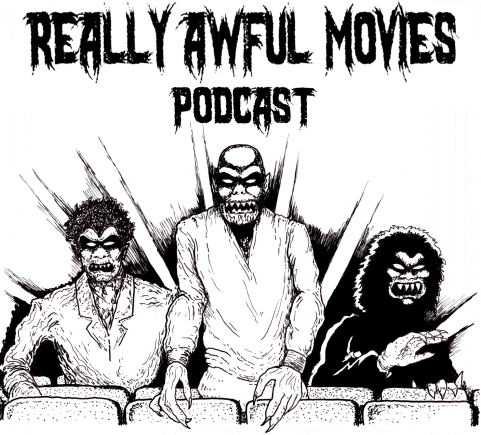 ***A reminder: For fans of low budget/horror cinema, The Really Awful Movies Podcast is updated weekly, every Saturday morning. We’re proud to be part of Eli Roth’s Crypt TV.

If you love the graphic above, we’ve got t-shirts. Support our site and pick one up!

Our approach is low-tech. We get together, grab a few beverages (you might hear the pouring of a refreshing IPA beer or ice clinking in a rum and coke) and cut loose.

We like to think we’re smart, fresh and informative. We’re not only horror authors (title coming out in 2016) but produce films as well. We don’t claim to know everything, but we’re well read and will happily insert everything from high-brow literary references to very-low pro wrestling ones.

We focus on the films, with occasional interjections from our personal lives (we’ve been horror / genre film fanatics since our teens). We promise no in-jokes or self-referential tangents, things that sully other podcasts (As a result, our shows are frequently much shorter than your average podcast, typically around 30 minutes , but longer for interview segments). We also promise to pull no punches. No anodyne, mealy-mouthed PC language here.

The bottom line: We’re passionate about film. We love movies, good and bad, and we love talking about them.

Join us every Saturday. We’d love to have you!

Thanks for reading/listening and have a really awful day!