Having steered clear of the Slender Man phenomenon, apart from blinking in recognition at the name and knowing that it featured prominently in a shocking true crime involving Wisconsin teens being tried as adults, we face the review of Always Watching with the some trepidation we would for a “found footage” film (which this is as well).

However, elements of it work well, surprisingly.

There’s certainly a unique spin on the sub-genre and a great plot device to get people scouring creepy homes. To wit, an investigative journalism team looking into the phenomenon of foreclosed houses and people who just up and leave when they run into difficult financial straits. Or is that really the reason for their sudden departure?

Unlike a lot of horror, Always Watching gives us some nice backstory, with not just fleshed out characters, but a workplace love triangle involving a leggy news reporter, Sara, her cameraman Milo, and a hot-head new arrival news producer from Boston, Charlie, who left Beantown under questionable circumstances.

So here’s the theme: people who’ve abruptly left somewhere for no reason.

The investigate team, fractured once the Bostonian moves in on the camera man Milo’s love interest, reluctantly work together to get to the bottom of why a family just disappeared, seemingly on the fly without any of their belongings. 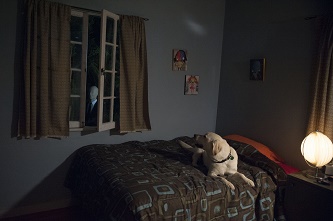 The mystery, of course, lies in clues left in home movies which they now have to peruse: This is found footage after all. But what they find starts to stalk them, and at that point there’s “nowhere to run to, nowhere to hide” to quote Martha and the Vandellas.

Being unfamiliar with the Marble Hornets web series (terrible title, by the way) it’s impossible to say whether this measures up, but there are a few sporadic scares and some solid performances.

And we’d be remiss not to mention what other reviewers have pointed out, namely the incredible performance by Marty the Dog (above), a golden retriever who gazes into space creepily and very convincingly.