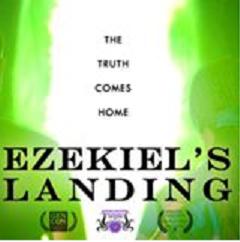 Repression and radicalism, rationalization and reconciliation, and of course, truth versus fiction are some of the themes explored in writer/director James Treakle’s full-length debut, Ezekial’s Landing: a micro-budget $10,000 alien-abduction production that, while not without it’s flaws, does hit enough correct notes to warrant a mild recommendation.

The film begins with Joel Hooper hosting Dr. Emma Wright on his Skeptic’s Armory podcast. Joel is a certified non-believer, whereas Dr. Wright has written a first-hand account book on alien abductions. Joel calls Emma out on her abduction story, decrying it as a bunch of bullshit and a way of her processing parental abandonment. As the film progresses, we learn that neither Joel nor Emma are whom they purport to be.

Seems long ago, something went down in Ezekial’s Landing, in the quiet town of Kasdan, Indiana. Joel’s dad was a paranormal researcher who experimented on his son and through some sci-fi fuckery, initiated a close encounter of the disturbing kind whereby Hooper Sr. was taken away on the mothership. Joel and a bunch of his childhood friends were abducted too, then returned to Earth with their brains implanted.
As the years passed, Joel repressed the event and embraced full-blown skepticism. The others, however, formed an alien-embracing cult, awaiting the day when they can once again be whisked away into the final frontier. They’ve adopted a reactionary “you’re either with us or against us” philosophy and are not above killing anyone who gets in the way of their group or mandate.

Joel ultimately forms an unlikely kinship with Dr. Wright and her assistant, UFO enthusiast Kass, as they seek to decipher the source of an otherworldly signal and ultimately stop the alien extremists.

Ezekial’s Landing is a film whose aesthetics belie its budget. The camerawork and lighting are solid and the score and sound design are evocative. The film is deliberately paced, and while never boring, never quite blasts off either.

The performances in Ezekiel’s Landing are hit and miss – understandable in an indie production. Nonetheless, some performances deserve to be singled out. Ransom Pugh as Joel acquits himself well.  His demeanor changes appropriately throughout the film’s duration as he’s forced to question and confront events long bottled-up and compartmentalized. Kristine Renee Farley, who plays the cult leader Natasha and was also impressive in Hi-8, is both seductive and menacing and serves ably as the film’s baddie.

Those looking to see CGI aliens and orifice probing will be severely disappointed. Ezekiel’s Landing is a quiet film, a meditation on the aftermaths of an abduction and its lasting repercussions rather than an all-out extraterrestrial spectacle.

While not a fan of most alien abduction films, I did enjoy this one and admire what Teakle did with his limited means. A promising debut that shows better potential of things to come, Ezekial’s Landing ably examines whether the truth is indeed out there, and if so, what does that mean for those of us left behind.