Over the last few years, the vampire genre has taken a right beating much more damaging than any Van Helsing-type character could mete out. Excluding a couple notable exceptions (Let the Right One In, Only Lovers Left Alive), the nocturnal ones have been sucked dry – metaphorically exposed to sunlight (or literally, as in the case of the massively and inexplicably popular franchise which shall remain nameless), and doused with holy water. Thus, if it takes a spoof like What We Do In the Shadows to bring respect back to Nosferatu’s ilk, so be it. And bring respect back it does, for not only is WWDITS a great vampire flick, it’s also something else that is equally rare of late – a riotous, laugh-out-loud-until-it-hurts comedy.

Written and directed by Taiki Waititi and Jemaine Clement (one half of the late and lamented folk-duo Flight of the Conchords)and set in Wellington, New Zealand, WWDITS is ostensibly a documentary about four vampires living as flatmates. Waititi plays Viago, the foppish, slightly effete, and very fastidious den mother of the bunch. Viago, when he’s not riding his flatmates about not completing the chore wheel, is pining for his lost, mortal love. He’s childlike and also rather adorable.

Clement plays the hedonistic 862-year-old Vladislov, a once feared and formidable medieval vampire who’s not quite what he used to be after losing to his arch nemesis “The Beast”. Vladislov is obviously modeled after “the real Dracula” Vlad the Impaler, although he confesses that he was more of a poker – Vladislov the Poker!

Rounding out the quartet is “bad boy” vampire Deacon, rather young at only 183 years of age, and 8000 year-old silent but deadly Petyr. Petyr sleeps in a crypt in a basement and is obviously based on Max Schreck’s Nosferatu. 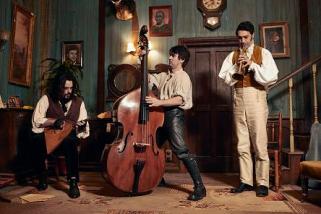 While Petyr is content to stay in his lair and have his food come to him, the others hit the town to find willing (or unwilling) victims. Unfortunately, besides being a little out of step with the ways of the modern world, the trio also has to contend with some of the pesky realities of being a vampire.

First, there’s that darn reflection thing. Since vampires don’t reflect in mirrors, this trio needs to draw sketches of each other to determine how they look. And needing an express invitation in order to enter an establishment makes getting into Wellington’s hottest clubs a bit of a bother. And woe the clean up should you hit an artery when feeding!

The dynamic of the group changes profoundly when Petyr turns young hooligan Nick into a creature of the night. Sure, Nick knows the bouncer and can get the boys into Boogie Wonderland, but he’s cocky and irresponsible and rubs Deacon the wrong way, leading the two to engage in a “batfight”. 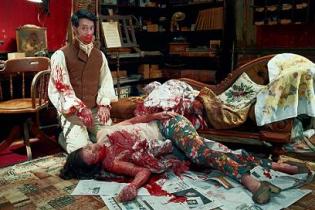 Coming out as a vampire is especially tough, and Nick doesn’t want to say goodbye to his best friend Stu. Luckily Stu’s a great guy and the gang takes to him and promises not to eat him. For his part, Stu introduces them to the miracles of computers, cell phones, selfies, Skype and YouTube. Finally, Vladislov is able to do his “dark bidding” – on Internet auction sites.

The jokes in WWDITS come fast and furious and there’s hardly a bad one in the bunch. Like the best mockumentaries, WWDITS has a keen awareness of the source of its mockery but also displays a lot of affection for it. The actors are a delight, and they make a tremendously cogent ensemble. One could tell that they had as much fun making the film as the viewer has watching it. Each character has quirks and subtleties that make them extremely endearing, and the film displays both ingenuity and a lot of heart. In the end, WWDITS is that rarest breed of film – one that is both charming and hilarious in equal measure.

One thought on “What We Do In The Shadows”