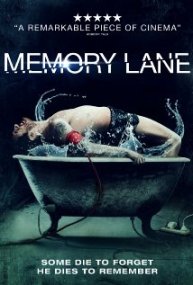 First, the pros. Memory Lane was made for $300. No, we haven’t left off a zero or two. This film was made for less than the cost of a brand-new iPhone. And it looks and sounds (for the most part – we’ll get to the other part later) great. The film looks slick, the cinematography is good for the budget, and the score is poignant and evocative. Kudos to first-time director Shawn Holmes for that.

Furthermore, it’s also refreshing to see a low-budget, indie film that’s more than your umpteenth zom-com or self-aware slasher. The story for this one is a little more ambitious, a little more cerebral, and that’s to the film’s credit. However, when the numbers don’t quite add up and the viewer is left hanging, the credit ultimately becomes a debit.

Memory Lane has echoes of Christopher Nolan’s Memento, what with its unreliable protagonist and leaps in chronology. Nonetheless, where Memento was like an M.C. Escher sketch – looping back and forth and all the way around again but always remaining tautly connected – Memory Lane is a puzzle whose pieces just don’t seem to fit.

Nick Boxer is a vet back from a tour of Afghanistan. He’s saddled with a boatload of PTSD and guilt. Having difficulty acclimating to civilian life, Nick is out for a late-night jog when he spots a girl whom he thinks is about to leap off of a bridge. He pulls her back. She identifies herself as Kayla M. and Nick falls deeply in love. 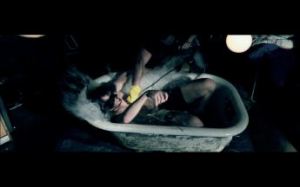 Without even knowing the girl’s last name, Nick buys a ring to propose marriage. Unfortunately, he finds Kayla dead in the bathtub with her wrists slit Heartbroken, Nick later decides to take his own life by electrocuting himself in the tub. He’s resuscitated by his friend Ben but not before experiencing vivid, tactile memories of his beloved – bits and pieces that he did not notice before. He also receives implications that Kayla’s death may have involved foul play.

Nick figures that if he continually stops his heart and is then revived, he can slip back into the afterlife and learn more about Kayla and the events surrounding her death. Nick and his friends devise a DIY suicide machine of sorts so Nick could slip back and forth and hopefully find the answers he’s looking for. 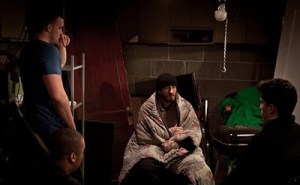 Memory Lane’s concept is intriguing. Unfortunately, the editing and non-linear structure ultimately sink the film and the viewer is left as befuddled as Nick. Furthermore, the miniscule budget rears its ugly head in the sound recording department as some lines of dialogue are impossible to decipher. And for a film whose central conceit is a mystery where each scene and word is imbued with some sort of clue or meaning, not being able to understand what the characters are saying is a huge drawback.

Ultimately, Memory Lane feels hollow. There’s a lot to admire in the film, but in the end, not a lot to love. The director does show incredible potential though, and if he can make a film that looks this good for $300, one wonders what can be done for the price of two iPhones instead.