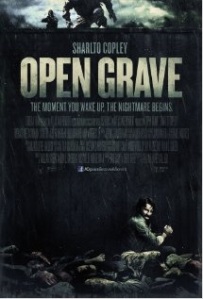 For a film called Open Grave, the story doesn’t really need one.

A man with amnesia wakes up in, well, an open grave, littered with a hundred corpses. It’s a bit excessive — literally overkill. The film’s got an intriguing enough premise that they could have shoveled dirt on this opener, which doesn’t necessarily mesh with the aesthetic of the rest of the film.

Anyway, the unnamed man (Sharlto Copley, from District 9 and Elysium) is hoisted to safety in the midst of what looks like a lightning / rainstorm straight out of Mario Bava. It’s Gothic electric that nearly blows the fuse, a supernatural setup that’s at odds with what is at its heart, a biohazard film.

The man encounters a bunch of well-armed strangers holed up in a home in the middle of nowhere, with a fully-stocked pantry (presumably including tins of red herring. This viewer’s question: “why don’t they just leave?” addressed by one survivor’s remark about how bright the stars are and how they’re probably miles from anywhere).

As it happens, none of these strangers, each of whom sports needle marks in the crook of their arm, has a clear recollection of what transpired to put them there; this leads to much finger-pointing, gun-pointing and paranoia as they gradually begin to recollect fleeting moments of their ordeal (“it may not be safe to be around me”). 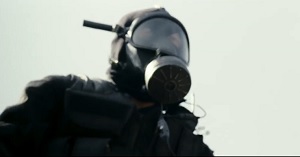 As they explore their surroundings with light from video cameras (their home is stocked with everything) they encounter a cabin with a feral woman chained to the wall being fed from a slop bucket. In the cabin is a video camera detailing the proceedings. With no clear leaders, the group of seven has to figure out how to cope with a possible killer in their midst or out in the wilderness (or both).

The “why don’t they just get out of there?” question alluded to earlier, is also addressed with the placement of bodies creepily strung up by barbed wire around the property.

The discovery of a mobile army surgical hospital in an abandoned warehouse nearby, confirms what many suspect: they were the victims of a bizarre government experiment.

Open Grave boasts a slow-burn build-up, several truly creepy moments, deft cinematography and atmosphere to spare. However, it’s marred by what’s become a staple plot device: the video evidence left at the scene that reveals all.