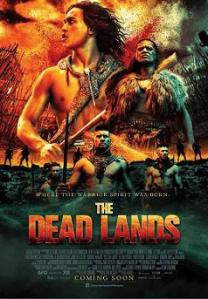 The Dead Lands is a coming of age flick, a revenge flick, and a kick-ass action flick set among the ancient Maori tribes in pre-colonial New Zealand.

As the film begins, two formerly warring tribes who now share a tenuous truce trek to the Place of Bones – a place where neither tribe has visited since their great war. One tribe is led by the tribal elder Tane, while the other is led by the young, hot-headed Wirepa.

Despite the truce, Wirepa vows to avenge his ancestors’ deaths. He is followed by Tane’s young son Hongi, who witnesses Wirepa defiling the bones of the ancestors. This is an act of war, and Wirepa initially puts the blame on Hongi.

Hongi wants to be a great warrior, but he is young and far from ready. His father tells him a tale of The Dead Lands – a place where a great tribe once lived before inexplicably disappearing. Now The Dead Lands are reputed to be haunted by ghosts and monsters.

That night, Wirepa and other members of his tribe invade Hongi’s village. They set homes ablaze and slaughter most of the tribesmen. As a further act of dishonour, Wirepa decapitates Tane and takes the head. Hongi manages to survive and vows revenge.

Hongi and Wirepa’s repective destinies converge in the mythical Dead Lands. In getting back to his village, impetous Wirepa orders his men to trek through the Dead Lands so as to save five days off their journey. Told that the Dead Lands hold many ghosts, Wirepa brashly declares that “The ghosts will hide from us.” Hongi, on the other hand, enters the Dead Lands seeking The Warrior to train him so he can exact his vendetta.

The Dead Lands is a lushly beautiful film. However, the beauty of the landscapes is contrasted sharply by the visceral brutality of the fight scenes. This is the first film to feature the Maori martial art of Mau Rakau, a fighting style that involves quick, brutally efficient blows as well as ancient weapons such as spears and the Patu – a paddle-like weapon which can be used to both crush skulls and hack off limbs.

Many themes are explored in the Dead Lands. Amongst the Maori, the Dead weigh heavily on the living and there is tremendous honor and respect for the old ways of the ancestors. Honor and tradition is represented in the elder Tane. However, Wirepa is representative of the hubristic nature of youth and the desire to attain power and glory. Wirepa wants to avenge his ancestors, but in doing so, spits in the face (both literally and figuratively) of the many sacred rules of conduct and honor that the Maori hold dear.

The theme of legend vs. reality is also explored. Hongi meets the feared and fearsome Warrior of the Dead Lands who, with a little coaxing, does take the young warrior under his wing. The Warrior trains Hongi and assists him in his quest for vengeance. Hongi learns the truth behind the Dead Lands and the Warrior and learns that ghosts indeed haunt the lands, but they are more the ghosts of sorrow rather than spirit. Finally, The Dead Lands is a meditation on the cyclical effects of warfare and violence.

The performances in The Dead Lands are uniformly strong. Lawrence Makoare gives an affecting performance as the terrifying yet ultimately all-too human Warrior. But it is James Rolleston’s performance as Hongi which is most impressive. The young actor undergoes a marked transition throughout the film’s duration – evolving from a child who is weak and unsure of himself and his place among his people to a warrior who is capable, mature, brave and wise.

The Dead Lands dialogue is delivered completely in the Maori language. While subtitles inexplicably deter some, it would be a shame if they prevented viewers from seeking out this singularly impressive film.