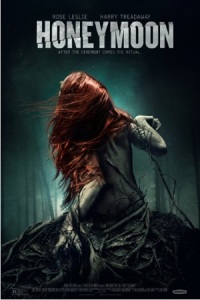 “Did something happen in the woods?”

Something always does and usually in cabins too remote to easily call for help.

Honeymoon offers a side order of body horror to go along with a standard supernatural premise of the something evil and unforeseen lurking in the woods.

At the outset we meet Paul and Bea, seemingly your typical gentrifying standard-bearers (from Brooklyn). They’re very much in love and blather on about Indian food.

They venture to Bea’s family cottage in what’s meant to be scenic Ontario. Paul so seldom escapes the confines of a 718 area code that he is baffled that people hunt in the country so here we set up a nice urban / rural divide — the spare, dark woods, shotguns, bear skin rugs and espresso making urbanites who mock VCRs. 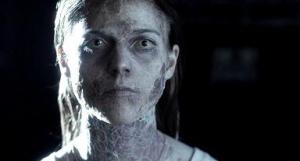 The couple has a run-in with another, who run the perpetually shuttered local restaurant: an ex hockey player “a little more alpha” than the hubbie who’s caught in a tense domestic dispute with his wife. To ratchet up the tension, the handsome hockey player was a close childhood friend of Bea’s and Paul can’t help but his jealousy get the better of him.

And with this, a hint that this honeymoon will soon head south. Husband Paul finds Bea wandering around in the woods. He chalks it up to sleepwalking but the experience stays with and changes her. Bea soon burns the French toast, forgets to put the coffee on and begins to exhibit increasingly odd behaviour (an outstanding portrayal by Rose Leslie, best known for Game of Thrones).

Cronenbergian goo appears as Bea’s goes from a mental to a physical transformation.