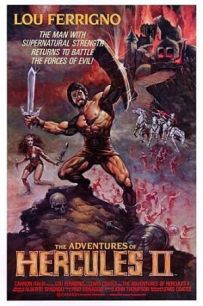 Those who suspected that the makers behind 1983’s Hercules were a little coo-coo for cocoa puffs were undoubtedly convinced that straitjackets were on the mandate after watching the 1985 sequel The Adventures of Hercules, a movie that is even more stupendously demented than its already pretty-fucking ludicrous predecessor. Ah Canon Films, how we love you!

Like the original, Adventures begins with a wonky, bargain-basement blah-de-blah-blah-blah prologue detailing the origin of the cosmos. The gods are still residing in space but Earth has been in the shitter for the last seven years because Zeus’s seven mighty thunderbolts have been stolen from him by an uprising of jealous and angry gods who have hidden the bolts and have released the destructive forces of anger and chaos. To add to this headache, the Moon is heading on a collision course with Earth which will have the cumulative effect of destroying the planets and all living things. And no, Carl Sagan wasn’t consulted on any of this.

In the next scene, we find a bound slave girl taken to an altar where she is to be sacrificed to Antius the Firemaster. Resplendent in his red wig, feather boa and haphazardly applied makeup, the one who controls Antius bears a shocking resemblance to a male Phyllis Diller. Antius is summoned, and what could only be described as a giant blue cartoon akin to a poorly rendered Genie from Aladdin, consumes the poor wench. 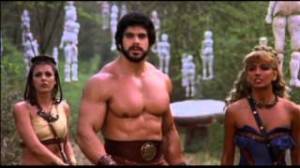 This act of brutality is witnessed by two scantily clad females who then lament their fates among the gods. They are Urania and Glaucia, and besides having names that sound like horrible medical conditions also serve to propel the plot much more than ol’ Herc in this one.

The fairer-haired of the two, Urania, treks to a blood-red Stonehenge replica where she prays to the fairies, henceforth referred to as “little people” throughout the film’s duration. Two horribly rendered rotoscoped optical prints appear and spout a bunch of nonsense about destiny and cosmic forces and other such claptrap.

Meanwhile, Zeus finally decides to get off his ass and send Hercules (Lou Ferrigno, reprising the role) back to Earth to retrieve the seven thunderbolts and prevent chaos from engulfing the planets. Which of course begs the question: Why in the blue hell did Zeus wait so damn long? 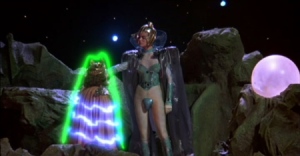 Herc materializes from space to Earth, and before he is even given a chance to recover from what must be a severe case of jet lag is beset upon by a giant shag carpet with the face of a baboon. Herc dispatches of this monster easy peasy which then disappears into the ether, leaving behind one of the thunderbolts. One down, six to go!

But do the gods take kindly to this? Hell, no. They take meetings to plot and conspire on top of a mesa in front of a discount-store sci-fi background with what looks like a giant bagel hanging overhead. They even go so far as to resurrect Minos, the big baddie from the first, to assist them. Yet Minos has designs of his own and plots with Dedalos, the goddess of Chaos, Disaster…and wait for it…Science…to overthrow the gods in Science’s name. Dedalos, another refugee from the first film, is a beautiful woman clad in a ludicrous costume which features a highly distracting bulbous codpiece. 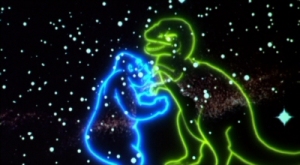 In their continuing quest to retrieve the bolts, Herc, Urania and Glaucia encounter all sorts of increasingly ludicrous foes, including rubber-suited slime monsters, human glow-sticks, black-masked Amazon warriors who are clearly men and a claymation Gorgon. Eventually, Hercules meets Minos in a climactic battle in outer space where they summon “pure energy” and become characters in an Atari 2600 video game. In the midst of the battle, Hercules transforms into a giant gorilla and Minos a dinosaur, and we are treated to the cheapest version of King Kong vs. Godzilla ever committed to celluloid.

4 thoughts on “The Adventures of Hercules”