It’s no secret that The Cannon Group put out some of the goofiest films of the 80s, and we love them for that. The studio’s adaptation of Hercules from 1983 stars former Incredible Hulk and personal trainer to Michael Jackson Lou Ferrigno as the umpteenth screen incarnation of the Greek mythological hero.

Another effort from Dario Argento protégé Luigi Cozzi (again billed as Lewis Coates); Hercules starts with a five minute prologue describing the origin of the universe. It’s the sort of wonky explanation (with bargain basement special effects) that would give Neil deGrasse Tyson nightmares. And in this version, not found in any reputable science textbook, the Gods reside on the moon.

We next meet the divine trio of Athena, Hera and Zeus. Zeus, who looks like an emaciated Santa Claus wearing an Ice Palace on his head, decides that mortal man needs a champion and creates Hercules. Hera’s job is to fuck things up for ol’ Herc while Athena just stands around looking stupid.

Herc’s spirit is put into the body of the infant son of the King and Queen of Thebes. Unfortunately, Ariadne, daughter of Minos and played by Sybil Danning and her heaving bosoms, steals a sacred golden “Sword That Stops the Fire” in order to lead a revolt so that her father may usurp the throne. 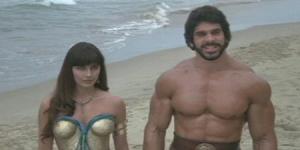 They attempt to kill the son too, but a maid has scurried him away and places him in a boat. “The river will take care of the child for us” says Minos, unaware that the boy counts Zeus as a homie. In one of the film’s most unconvincing effects (which is saying a lot), the giant hand of Zeus reaches out to pluck young Herc as he’s about to plunge over a waterfall. Of course, Hera just has to make things difficult, so the boat is soon beset by rubber snakes with glowing eyes which lil’ Herc makes short work of. He grabs them and throws them out of the boat, turning them paper mache in the process.

Superman…I mean Hercules…is adopted by a childless couple who raises him as their own. Soon, he matures into the strapping piece of man-meat that is Lou. Still, that darn Hera just won’t leave the poor guy alone. As he’s uprooting trees with his bare hands, she sends a giant bear to attack his dad which leads to a scene of Hercules wrestling a man in a bear suit intercut with stock footage of an actual giant grizzly.

Thanks to the machinations of Hera and Minos, Herc is soon an orphan and decides to set out on a quest to find out “why am I stronger than other men and why does my strength bring so many sorrows on my head?” He travels to a kingdom and wins the right to accompany the royal daughter Cassiopea to Athens. The two fall for one another, but almost immediately they are attacked by Ariadne and her men. Cassiopea is kidnapped and Hercules is thrown to the bottom of the ocean.

Herc escapes and swims for seven days and nights before washing up on the private island of an old crone who resembles Grizelda from The Hilarious House of Frightenstein. After drinking 10 drops of Herc’s blood, the crone transforms into the unbelievably gorgeous sorceress Circe. Hercules needs to rescue his beloved, who Minos intends to sacrifice to Hera, and Circe accompanies him for her own reasons of which we fail to understand/recollect.

They travel over the Rainbow to Hell (somehow we can’t picture AC/DC ripping into that number) and encounter many trials and tribulations. At one point, Circe uses her magic to grow Hercules to immeasurable size and he splits a mountain into two, thus separating the great continents of Europe and Africa. So that’s how it happened! No wonder I failed high school geography!

Of course, all this nonsense is leading to the final showdown between Hercules and Minos. While not as deliriously nuts as other Cannon offerings from the period, Hercules should still be kept far away from anyone who relies on an EpiPen. Its sheer goofiness and rip-roaring sword and sandal action makes it ideal viewing for the kiddies and great fun for the kiddies at heart.