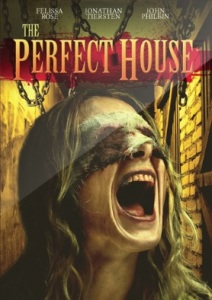 In 84 minutes, the anthology horror The Perfect House features kid fratricide, scalpel eye gougings and a weed whacker to the face. Don’t borrow anything from a neighbor, might be the message here. Just let those weeds grow.

The look of The Perfect House (thankfully not the backstory) is inspired by the co-director’s grandpa’s home in Cheektowaga, a suburb of Buffalo, NY and the butt of jokes for Torontonians (But not us. We love our border brothers and wish them the best.)

The premise: a newlywed couple is kicking the tires on what could be their dream home (if you’ll forgive the analogy because a house doesn’t move unless it’s heading to a trailer park).

They’re being shown around the property by a real estate agent with an unorthodox sales technique: a blouse unbuttoned and aggressively flirtatious banter. I’ll take it! But wait. The abode houses secrets of the most sinister.

A caveat: we’re turned off by people held captive and tortured in horror. It’s a cheap way to instill fear, pretty repulsive/degrading and then boring. To the filmmakers’ credit, in some of these scenes when this happens, there’s terrific, snappy dialogue.

As the agent’s hormones rage, the film flashes back to three different horrific occurrences that transpired at this home (you’d think having multiple murders at one address would mean no Multiple Listing Service updates for this homestead and a quick date with a wrecking ball, but we digress). 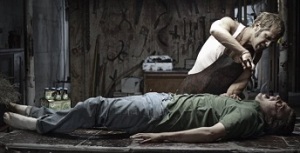 He’s no Dexter, but he’s dextrous.

Anyway, there’s a family led by an abusive matriarch, a dinner party headed by a torturing, kidnapping psychopath and another mental case who abducts strangers and locks them up in cages in the basement.

IMDb critics have been unnecessarily dismissive in their comments about the acting, which to be fair, is mixed. But it’s certainly not a detractor and there are a few standout performances.

Kudos for the obvious heart and soul that went into this production and for the gung-ho efforts in launching this project on Facebook.

Minus a half star because though well-executed, The Perfect House is a sub-genre we’d sooner avoid — much like a certain Buffalo basement. City of Good Neighbours my ass.

[Thanks to Wild Eye Releasing: a growing leader in independent cinema since 2008]

1 thought on “The Perfect House”