Raw Force begins with a plane piloted by an Adolph Hitler look alike. On board are a bunch of soldier of fortune types and an assortment of Asian beauties. The plane lands on an island in the Philippines, and the passengers are greeted by three men dressed in hooded robes.

The monks (one of whom is played by the always fun Vic Diaz of The Big Bird Cage and Too Hot to Handle) order the women to strip naked and then imprison them in a bamboo cage. One of the women is deemed too skinny for whatever nefarious plot the monks have in mind and is taken from the cage. She begs the mercs to take her back with them when a man wearing a kimono steps out from the bushes and slices her in two.

Cut to a car where three jokers are heading to a cruise ship. One is reading a tourist brochure (!) advertising an island where disgraced martial artists are buried and monks raise the dead to protect the island from outside forces. Screw Disneyland…We want to go there! 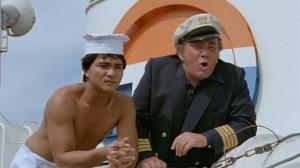 The ship is captained by a cantankerous Cameron Mitchell (Deadly Prey), and the three men are introduced as Taylor, Schwartz, and O’ Malley (partners in law – actually accountants.) Turns out they are also martial arts students and one of them – Mike – bears an uncanny resemblance to Police Academy’s Steve Guttenberg.

On board is a motley crew of passengers. In addition to the aforementioned martial artists, there is the tour operator, a sex-crazed alcoholic named Lloyd, his wife and a group of bikinied beauties, one of whom is a member of the LAPD swat team.

During a port of call in Manila, Mike and Lloyd sneak off to go to a “cathouse.” The baddies from the opening, who exchange kidnapped women for rare jade, pose as police and stage a fake raid to acquire more human cargo. Lloyd and Mike escape, but not before mentioning to Adolph that they are planning to visit Warrior’s Island. The bad guys, displeased that these buffoons are inadvertently attempting to invade their source of jade and human trafficking, make plans to thwart them. (Memo to villains: If you’re using a remote island in the Philippines for nebulous criminal activity, first make sure it’s not publicized in a glossy tourist brochure.)

At a bar later that night, the Captain needs to answer the call of nature and is kidnapped at knife point. Luckily the three stooges are there as is the ship’s cook, who also happens to be a kick-ass martial artist. Go figure. Finally, after a lengthy interlude where the film morphs into an 80s T&A romp, the action returns as the baddies invade the ship, slaughter most of the crew and passengers and set the boat aflame.

The principle cast members escape in a lifeboat and drift aimlessly until they wash up on Warrior’s Island. The baddies are there and Adolph mentions that the monks require the women not for sex but for food. Apparently eating barbecued human flesh gives one the power to raise the dead. You learn something new everyday. 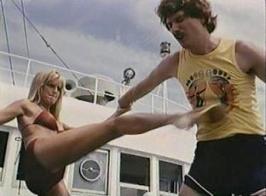 The heroes are discovered and they have to battle their way off the island, fighting off not just the villains but also the monks and the undead disgraced martial artists.

Raw Force is certainly different. It’s a Kung-Fu/T&A/Zombie/Women in Prison/Cannibal hybrid made on the cheap in the Philippines. It sounds like a recipe for exploitation nirvana, yet it fails to fully satisfy. The reason: There are just too many ingredients in this stew. The filmmakers stuffed as many exploitation elements in the film as they could, and the effect is not dissimilar to seeing clowns jammed into a car in a circus. It just feels lame. The film ends with the line “To be continued….” Optimistic hope for a sequel that never materialized – and thankfully so.

One thought on “Raw Force”