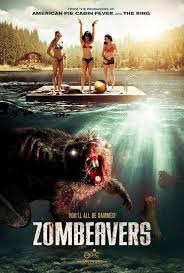 As proud Canucks, it behooves us to begin this review with a word or two about the world’s second largest rodent. In 1975, due to the fur trade’s importance in the development of our land, the beaver was adopted as our national animal. It appears on our five-cent piece and is the symbol of many units within the Canadian Armed Forces and also the Toronto Police Services and the Canadian Military Engineers. Many a Canuck youth enjoyed watching the installment of Hinterland Who’s Who showing the busy beaver building dams and gnawing through pieces of wood.

Suffice it to say, gentle nature programs never showed the beaver as a rabid, mutated beast with a taste for human flesh. For that we need to turn to Zombeavers, a horror-comedy that we caught at Toronto’s After Dark Film Festival.  In turning a relatively benign creature into a carnivorous killer, Zombeavers attempts to do for the Castor canadensis what Peter Cottonhell did for the Lepus.

As the film begins, that deus ex machina of movie mutations, the barrel of toxic waste, is seen floating down a river. It abuts a dam and immediately sprays its contents all over the habitat.

Cut to a girl sitting in a gas station bathroom sobbing. Her name is Jenn, and she’s lamenting her cheating rapscallion of a boyfriend. To take her mind of the lout, her two friends, Zoe and Mary, decide to whisk her off to Mary’s cousin’s cabin by the lake for a girl’s weekend.

The trio is alternately complaining about having no cell reception and commiserating about men when a series of loud bangs puts them on alert. Turns out the boyfriends, including Jenn’s philandering ex Sam, have decided to join the girls even though they were clearly not invited. Along for the ride are the truly obnoxious duo of Buck and Tommy.

The bangs continue and Jenn finds a giant, mutated beaver in the bathtub. Tommy bludgeons the poor fella to death with a baseball bat, stuffs it into a garbage bag and places the bag on the front porch. The next morning, the bag is still there but no beaver. 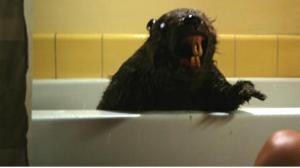 Before long, the kids are stranded on a raft in the middle of the lake being attacked by hordes of the Zombeavers. Sam confirms his douchebag credentials by tossing Zoe’s admittedly adorable puppy into the water as beaver bait.

Eventually, they join up with a Grizzly Adams outdoor survivalist type and try to fend off the hordes of rampaging rodents. They barricade themselves in the cabin Night of the Living Dead style and board up all the doors and windows, blissfully unaware that beavers chew through wood like William Shatner chews through scenery.

Any discussion of Zombeavers would be incomplete without mentioning that those who are bitten by the rabid beavers eventually grow gigantic incisors and a large thumping tail and become beaver hybrids themselves.

So is Zombeavers worth a…ahem…dam? It really depends on your sensibilities. Horror-comedy when done right can be a joy (see Tucker and Dale vs. Evil), but when done wrong can often grate. Unfortunately Zombeavers falls decidedly more into the latter camp. Despite some good gore and the originality of the premise, the characters are unlikable, the jokes for the most part aren’t terribly funny, and in the end, there really isn’t much left to chew on.